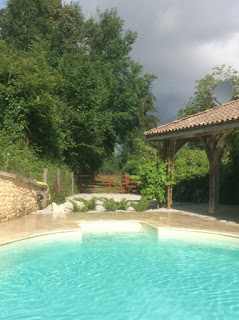 We wanted sunshine and now we've got it and we keep coming indoors to cool down! It is so hot I can almost feel my skin sizzling like bacon in the frying pan after sitting in the sun for ten minutes. I don't know if it is the heat, but something is making Tim very restless these last couple of hours. He's barking at everything that moves and some things that don't - and when he does it beneath the bolly the sound echoes tremendously. Perhaps another dog has moved into the area with a holiday family. There don't seem to be many holiday folk around, and there isn't much traffic either. No tractors moving except for the local farmer who feeds his cattle and checks on the calves sometimes twice a day. Looks as if the petrol-diesel scare has put some people off coming south.

Last night we entertained ourselves on the bolly having dinner and a glass of wine and discussed what the French farmers went home to eat after a hard day's work. Would it be the French cuisine we hear so much about, or would it be fish fingers and chips? I hope it is the classic cuisine! We have no way of ever discovering which, of course. (We ate well on French sausages, bacon and mixed salad with chunks of baguette dipped in the Olive oil, lemon juice and balsamic vinegar dressing. Yum!)

I have found a good book to read from the resident library - The Secret Keeper by Kate Morton. Immensely long and detailed, but with an intriguing story. Still only half way through. The author has certainly not followed the advice that proliferates on the internet about keeping it pacy and cutting out back story and detail. This one is all about back story and detail!

Two sessions of weeding done this morning before 9,30am. Dh is considering cutting the grass, which is getting rather long. Whipping around my knees now, not quite so pleasant early in the morning when it is wet with dew.