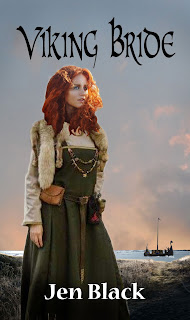 VIKING BRIDE is set in the Hebridean island of Lewis sometime around AD1040. It begins with the news that a marriage has been arranged that will break the hearts of two young people and force others into rash actions that have unsuspected consequences.

It was a marriage no one wanted, least of all the bride.

She knew the groom loved someone else. But how would you avoid a forced marriage?

Arrange a swift abduction? An accident? What happens when a third party takes a hand in the game and changes everything?

When chieftain Ragnar and his friend Grettir force the marriage on their offspring they have no idea of the powerful feelings they will unleash, nor the dreadful consequences that will follow. Set in the Hebrides in the eleventh century, when Christianity was taking hold in Viking communities settling down as farmers and neighbours, but the old familiar gods had not quite been forgotten.