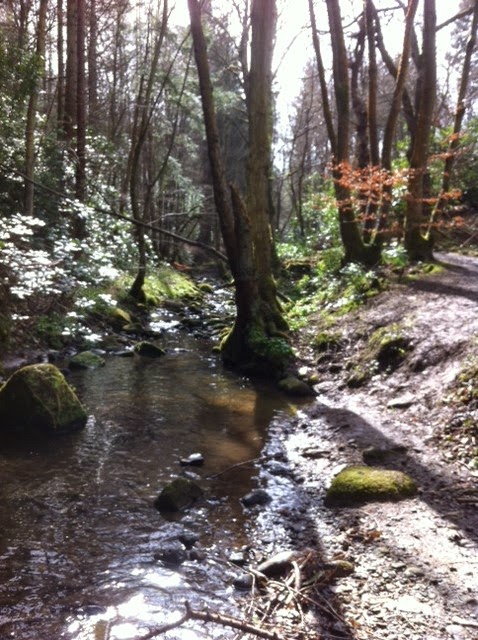 We've had a week of splendid weather and I've spent a lot of it outdoors, so writing has taken a back seat. Considering it's only April, the weather has been amazing, reaching temperatures of 20 and 21 degrees. I'm so not used to such heat that working at anything was a trial! The forecasters claim the weekend is going to be cold, so I tell myself I'll catch up then.

Sometimes I need a break from working at the computer day after day. I get some relief every day now I have my dog, because he's a high energy type who needs a lot of exercise. He gets three walks every day and he's just impossible if he doesn't get those walks. While I'm out with him I see how much new growth there is on trees and shrubs, even on the meadows as the grass begins to grow again. The range of colours in tree foliage is beautiful and changes day by day. Watching him bound across streams, leap fallen logs and bouncing through mud patches is such a joy.

But sometimes the three walks a day are not enough and the temptation to abandon the computer becomes too much. So I give in to it, because I know that I won't produce anything worth while until I've refreshed my mind by pulling lots of fresh oxygen into my lungs. There's nowhere better for that than walking in forests.