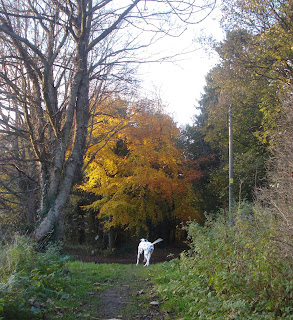 If you've ever been confused by when to use a comma, then read Ginger Simpson's post on 29th Novemebr at this link: http://mizging.blogspot.co.uk/  If you are English* it may or may not help, since we use the wretched things differently to Americans and that just adds to the confusion. A friend who teaches English in America gave me these 5 comma rules that rule the world

1. Use a comma after an introductory phrase or clause
2. Use a comma before and after a parenthetical phrase or clause  (Lynne Truss calls this a weak interruption in a sentence. They can usually be lifted out whole without destroying the grammar)
3.Use a comma to separate two independent clauses linked by a coordinating conjunction  (and, but, for, nor, or, so, yet) (If you omit the conjunction and keep the comma, this becomes the splice comma. Personally I don't care for the splice comma)
4. Use a comma to separate items in a series (but do not use one before the and at the end of the list unless you want to be guilty of using the Oxford comma.)
5 Use a comma before a quotation when an introductory phrase with a word like say or reply precedes the quotation. (I don't think I ever knew this rule)
6. DO NOT PUT a comma between two verbs or verb phrases in a compound predicate. (Evidently I sometimes do this. My excuse is that I do it in the old-fashioned, time-honoured way we learned to do when we read aloud at school or wherever. It's simply a pause for breath, or for emphasis, perhaps to heighten tension as you make your audience wait for the next bit)

There is also the comma used before direct speech though this seems to be dying out with some writers. Either way sits happily with me, as long as it is consistent throughout the piece or novel I'm reading.

I love some of the examples of sloppy or careless use of commas:
Leonora walked on her head, a little higher than usual.
The driver escaped from the car before it sank and swam to the river-bank

But of course, you know exactly where the commas should have gone, don't you?

* I've begun using English as my descriptor since the other partners in the United Kingdom began insisting on declaring themselves Scottish or Welsh or Northern Irish.

Unknown said…
OK, now I'm more confused than ever! In my native Germany I used to know exactly where to put commas, but here in the US they seem really random.
12 December 2013 at 03:18