November 25, 2011
Working hard on Matho's story now. It's been put aside for the right amount of time, and I can see why the three agents I submitted to said they liked the story, the premise, the setting but were not sure they liked the writing - though they thought that was confidant and well done. The comment certainly me puzzled and I decided to withhold sending it out any more until I'd gone through it again.  Reading historical stuff on the market today, and then reading my ms, I see that I have been influenced by US writing standards - short, clear sentences, short paragraphs and little description. Seems that is not what UK agents are accepting, but at least I know what to do now.

﻿ Back in the north west of Scotland, we tootled up and down the front street of Lochinver, and stared out at a grey horizon were sea and sky simply merged into one another. Clouds sat on the mountains, and everything looked grey. Few shops, mostly closed because now it's out of season and few people about. Not an entrancing prospect. We've visited the Highland Stoneware Pottery many times, and didn't want to do it again as it just makes us want to spend more hard-earned cash. Getting out and walking some of the very pretty walks we've done before - one to Achmelvich, another to the Kirkaig waterfall, would be an invitation to another drenching. 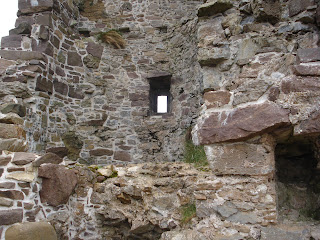 So we set off east out of Lochinver on the A837 alongside Loch Assynt and Ardvreck Castle on the way back to Ullapool. I photographed the notice board, which hopefully will show up more clearly if you click to enlarge the pic, because there is little left of the castle. It stands on the island side of a neck of land jutting out into the loch, and a cetain times of the year when the burns are in spate and feeding the loch, it's possible they'd be splodging to get across.
Ardvreck

It's a pity it's so much an unstable ruin, because it was built around 1490 and in use in the sixteenth century, which is the era that really interests me. I came away with an impression of huge grey stones and wobbly bits of wall, small rooms and a wet and windy place to live - even today.

Dean Crawford said…
Hard to judge what the agents you sent the work to may have meant with regards to your writing Jen, but I would continue to submit the work unless you're absolutely sure of your assessment. It's SUCH a subjective business that they're in, and three agents' opinions aren't necessarily enough to make a good judgement call. My debut was turned down at the first-submission stage by eight of the ten agents that I sent it to, and I only sent it to well respected agencies searching for authors writing in my field ( thrillers ).
Maybe ask for friend's opinions? Many say that this is a bad idea because of bias etc, but frankly, the more opinions you have, the clearer a picture of any faults in your work you'll have, as those faults ( if any ) will be mentioned more often.
25 November 2011 at 15:43

Jen Black said…
Reading my own stuff back after a long break, I think they were right. The changes I'm making are not great, but when I send the next partial out, the response will be interesting!
26 November 2011 at 11:45