November 23, 2011
I read a blog this week that still has me thinking about what it is that I might be doing incorrectly with my latest story. If you want to give yourself  a session in frustration -
here is the place. If I hint at headings such as Limp and Lifeless Prose, All Questions but No Answers, I think some of you will get the drift of the piece. if you don't write, but read a novel a week, you might still be interested.

As for my travels in the north west, let me begin with the moment we stopped to admire the beach. We thought we were looking west at the Atlantic, assumed it was Stoer or even Clachtoll, but just a minute, isn't the sun in the wrong place? Hauled out the compass - yes, I do carry one, just in case of need! and then the map, and discovered we were staring due north at the rollers coming in across the sand of Clashnessie Bay. So, we were not as far on as we thought. Still, the driver needed a break from dipping and diving around blind corners, so we sat for a while. I think there were a total of a dozen houses that made up the village of Clashnessie, and some of them were a mile apart from their neighbours. As well as the typical modernised croft-cottage, we noticed large two and three story new builds away on the hill behind the village. Perhaps in season they take in tourists, but the end of October seems to be the signal for the end of the season. Certainly we had the road to ourselves. I think we passed only three or four cars, and they were all going in the opposite direction to us. A message there, perhaps!Once we moved out of the village, we caught a glimpse of a massive waterfall in the distance. Better weather and we might have walked over to it. 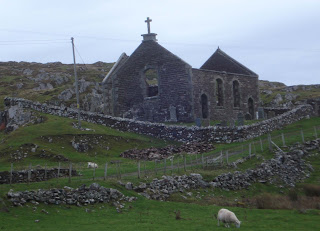 It was certainly spectacular, and I suspect it was so because of the overnight rain backed up in Loch an Easain and its chain of interconnecting lochs in the hills behind Clasnessie

﻿ Moving on south and then south west toward Lochinver, we passed several settlements - Stoer with the graveyard and the roofless church, Clachtoll with the beach and a campsite - though we didn't see a single tent marring the bright green grass - and through the bleak, rocky moorlands.  Away in the dsitance we caught a glimpse of aWe passed the turning for Achmelvich, off to our right, and had the weather been fine we would have gone to the  wonderful white sand beach. But in dull grey misty weather even stunning beaches look damp and miserable. We pressed on to the T-junction and were so glad to be on a dual carriageway once more.
Achmelvich Clachtoll Clashnessie Scotland Terrible Minds