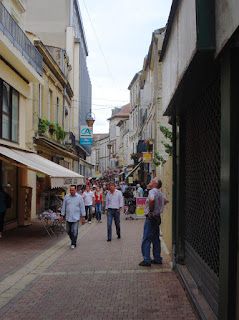 We're all business here. Our friends have arrived, and the old kitchen has been ripped out - sometimes with a sledgehammer. Sam the labrador lies and watches, front paws crossed, with a slightly bemused frown and I expect the cheeky little mice who popped up beneath the lid of the old fashioned cooker, and ran across the sofa in broad daylight, will be miles away by now. We found their nest, made up of scraps of kitchen paper, beneath the draining broard. Amazing how they found the gap and set up home in a space less than two inches high.

So now we're camping out - washing up outside, eating outside - but of course we have all the other conveniences of toilets and hot showers and sprung mattrassess....right now I've stolen away while they plan the positioning of the new sink. I've re-joined the critique group, and now some of my time is taken up critiquing the work of others, and honing my own stuff for perusal. I've begun a story called Victorian Beauty and I've just sent in chapter 2 - and for once I don't know what the ending will be. I play with ideas for the ending before I fall asleep at night, and have several variations, but have made no decisions.
It's raining today. A soft, drizzly rain, the kind we get back home, and I haven't had time to trim down any new pics, so here's one I took last week. It's the Grand Rue in Bergerac.
kitchens mice the mill Victorian Beauty