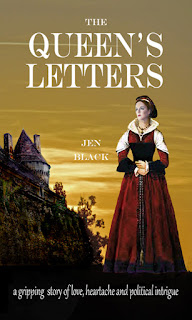 This is Book 3 in the Scottish Queen Trilogy and I plan to publish it mid-November. That gives me time for last minute checks so that it will be typo-free.

Here are the opening lines:

Matho tilted his stool until his shoulders touched the sun heated stone of the tavern behind him and let out an involuntary yelp. “God’s blood,” he muttered, hitching his jerkin between himself and the wall. “Wouldn’t ye think there’d be a breath of wind up there somewhere?” For days now, the east coast of Scotland had sweltered in sunshine with only the merest hint of a breeze.

“Aye.” Jordie consulted the cards in his hand and flipped one onto the mounting block built into the inn wall beside them. “Ye can wait weeks fer the wind ye want. It’s been blowin’ up out o’ the sou’west for days now.”

“Not today, it isn’t. There’s no wind at all.” Matho wiped sweat from his face with the tail of his already damp shirt and picked up his cards again. “I’m not asking for much,” he added plaintively. “All I need is a wind that’ll get me to France.”

“Isn’t it allus the same, though?” The inn-keeper’s son was thirty if he was a day, but Jordie’s plumpness and lack of beard made him seem much younger. “Say ye want tae sail north tae Aberdeen and ye’ll get nowt but a wind that’ll take ye south. Venture a wee word that it’s France yer after an all ye’ll to get is one gannin’ north.”

“I don’t want to go to Norway, Jordie. France’ll do fine.” Matho dragged his hair away from his damp forehead. Days this warm were rare in Scotland and a windless one was very nearly unheard of so close to the sea. Seawater swirled around the posts of St. Andrews wharf, fishing cobles stood idle at their mooring and the smell of seaweed and fish numbed the nose to everything but the thick, heavy smell of hot pitch from the sailor busily painting his boat thirty paces away.
“The English were damned lucky with the wind back at the beginning of the month,” Jordie remarked. “It blew from the south just when they wanted it.”

Matho scowled. The English attack on Edinburgh held unpleasant memories for everyone, and especially for him. If Phemie had not died that day, they would have been married now and living happily in his cottage in Aydon. The memory of her lying on the grass, her throat savagely cut by English soldiers, rose from the back of his mind. Abruptly he pushed away from the wall, scattering cards across the stone block. “I’m fed up with cards and days too hot to bear, and by God, I’m fed up with this miserable town. I know the streets down to the last stone sett and every pathetic excuse for an inn on this foreshore. Another day of it, and I’ll go mad.”

“Yer getting restless,” Jordie said placidly, squinting up at him through a lock of hair. “I can understand it, reet enough.”
fiction historical fiction Opening lines. Scottish Queen Trilogy Book 3 The Queen's Letters writing