Showing posts from August, 2017
Show All

A geographical entity I 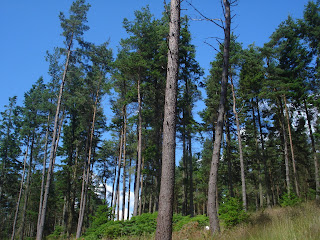 Before Romans times, “Britain” was just a geographical entity with no political meaning and no single cultural identity.  The gene pool of the island has changed slowly and the idea of large-scale migrations has been widely discredited. The island has always consisted of multiple cultural groups and identities, many of which looked across the seas for their closest connections - they did not necessarily connect naturally with their fellow islanders. Genetic studies are revealing much more of this island's past and it makes fascinating reading. From the arrival of the first modern humans - who were hunter-gatherers, following the retreating ice northwards - to the beginning of recorded history is a period of about 100 centuries, or 400 generations; a vast time span we know very little about.  Biologically these people were part of the Caucasoid population of Europe. The accepted regional physical stereotypes - red-headed people in Scotland, small, dark-haired folk in Wales an
Post a Comment
Read more 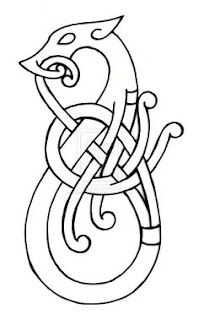 King Malcolm II King Malcolm was for some time the most powerful man in the country. King Owen of the Britons of Strathclyde had died without issue, and Malcolm’s grandson, Duncan, was the rightful heir through marriage. The Four Kingdoms of Alba were finally united under one throne  -  and under Malcolm. King Duncan I Duncan was related to previous rulers through his mother Bethoc, daughter of Malcolm II. He became King in 1034. Defeated by the native English at Durham in 1040, he was a weak character and a poor leader. At a place called Bothganowan meaning "Blacksmith's Hut" in old Gaelic, (or Bothgofnane , Bothgofuane , or Bothgowan , today Pitgaveny near Elgin), his cousin, chief of the northern Scots defeated and killed Duncan, and took the kingship for himself. King MacBeth The Mormaer of Moray, MacBeth (Mac Bethad mac Findláich,) claimed the throne on his own behalf and that of his wife Grauch, and formed an alliance with his cousin the Earl of Or
Post a Comment
Read more 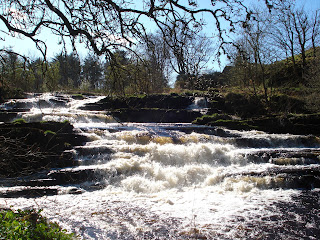 Alban kings The first king named as rí Alban ( King of Alba) was Donald II who died in 900. Before that the title seems to have been King of the Picts or King of Fortriu . Constantine II followed him and reigned for nearly half a century. When he lost the battle at Brunanburh, he joined the Culdee monks at St. Andrews and tradition claims he and bishop Ceallach of St Andrews, brought the Catholic Church into conformity with that of the larger Gaelic world. The period between the accession of Malcolm I (Maol Caluim Mac Domhnuill) and Malcolm II (Maol Caluim Mac Cionaodha) was marked by good relations with the English. When King Edmund of England invaded cumbra land (Old English for Strathclyde or Cumbria or both) in 945, he then handed the province over to king Malcolm I on condition of a permanent alliance. During the reign of King Indulf (Idulb mac Causantín, 954–62), the fortress called  oppidum Eden , i.e. almost certainly Edinburgh, was captured. It marked the first foothol
Post a Comment
Read more 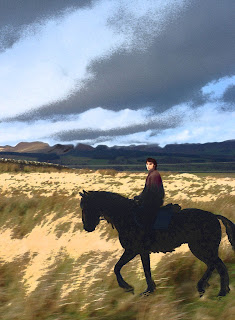 Alba is the Scottish Gaelic name for Scotland. Historically, the term referred to Britain as a whole and is ultimately based on the Indo-European root for "white." I would guess the white chalk cliffs had something to do with it, plus when viewed from the north coast of France, or the sea, the island is often under a layer of white cloud. Scottish Gaelic speakers used it as the name given to the former kingdom of the Picts around the reign of king Causantin mac Aeda (Constantine II) from 943–952. The region Breadalbane ( Bràghad Albann , the upper part of Alba) also takes its name from it. The name There is no precise Gaelic equivalent for the English terminology 'Kingdom of Alba' since the Gaelic term Rìoghachd na h-Alba  means Kingdom of Scotland. English scholars adopted the Gaelic name Alba to refer to a political period in Scottish history that existed between 900 and 1286. The land The territory of Alba extended from Loch Ness south to the firths of C
Post a Comment
Read more 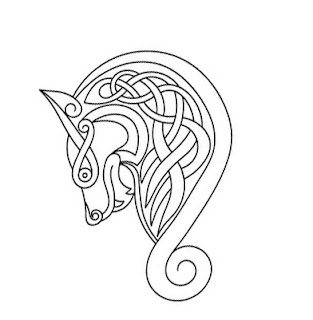 Early History The tribes to the north of Hadrian’s Wall were largely undisturbed by the Roman occupation of Britain. A Roman document of the 3rd century mentioned the Picti , a new tribal group that had established a dominant position in the country. Scholars suggest this was a Romanised version of a tribal name, or that they tattooed their bodies ( picti is Latin for 'painted people'). They are thought to have been an indigenous people with a non-Indo-European language. They were later subdued by Celts - not from within Scotland, but from overseas. In the 5th century a Celtic tribe from Northern Ireland settled on the west coast of Scotland. The Scots The invaders were called Scots. (Yes, the original Scots were a tribe from Northern Ireland). The Scots established the kingdom of Dalriada in both what is now Northern Ireland and the south west of Scotland. By the 9th century the Irish Dalriada succumbed to Viking raids, but in Scotland the Dalriadan kings established
Post a Comment
Read more 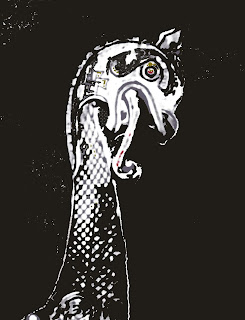 When writing historical novels with Vikings as central characters there is much scope for where to place a story. I like to place them in the north-west Highlands because I have enjoyed so many holidays there. Vikings settled in the northern and western isles and along the coastline of Scotland from Caithness to Argyle during the early part of the ninth century. By the middle of that century a Viking kingdom had been set up. I soon found that research in this area is sketchy and conclusions were hard to come by. For example, Laithlinn was the Viking name for Scotland. Laithlinn is also written as Lothlend, Laithlind and later Lochlainn, and not all scholars believe the name refers to Scotland. Information in the Irish Annals, the Icelandic Sagas and Norse histories of South West Norway often contradict each other. Old languages present further problems and to add to the confusion, writing itself was not the precise thing it is today. Spelling of names was inconsistent and punctuat
Post a Comment
Read more

There are several marriages portrayed in the Poldark series currently airing on tv. The third  element of series came to an end last Sunday, so it seems to good time to look back on the entire series so far. The prominent couple, Ross and Demelza,  is shaping up to be a match of equals in spite of her having been brought into his house as a lice-ridden kitchen maid. Ross acknowledged that he needed a wife who could skin a rabbit as well as wear a pretty frock, and Demelza fits that very well. Perhaps even Ross didn't expect her to be capable of taking on the running of the farm and the mine as well as the kitchen and the family. Because she has the intelligence to do that, she is slowly starting to come into her own, accusing him of not asking her opinion of anything. She is beginning to think like a modern women.  Then there’s Elizabeth and George. He has loved her since forever and tries to woo her still with expensive gifts of jewellery that she knows are perfctly vulgar in
Post a Comment
Read more 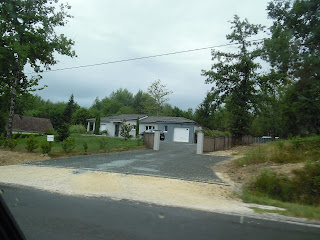 I'm so deep in edits that I can hardly think of anything else, which means I don't have anything memorable happening in my life. I have a few pics of my French holiday as yet unseen on here, like this one. I often take them from the car as we journey along, and sometimes they are clear and sometimes they're just a blur, but with modern digital cameras this really doesn't matter. If I get a good pic, I'm happy and if I get a blurred one, I simply delete it. (I did not do that in the days of my old Olympus and film!) This is another house in France - they're all so different - and one thing I notice is that the French are not fussed about wires trailing over their heads. I think almost every pic I have has a telephone/electricity wire in it, mostly with a pole right beside the house.
Post a Comment
Read more 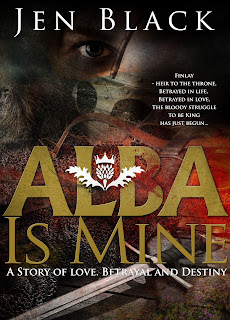 I’m close enough to publication of ALBA IS MINE to reveal the cover. I think it is wonderful and I hope it encourages people to take a look and – who knows? – buy.  It will be available only on Kindle, as I’ve found that for me, sales of paperbacks are not worth the effort it takes to get them out and I’ve never ventured into Smashwords or Nook. Keep things simple is my motto. I’m looking to have it available by 1 st October, so in order to make that happen, I shall get to work right away. The printer died on page 29, but when the new one arrives (any day now) I shall have a fourth edit ready to print out and read through. By then it should be good to go. Most of you will know that Alba was the ancient name for Scotland at a time when Vikings and various other peoples fought for supremecy north of the border.
Post a Comment
Read more 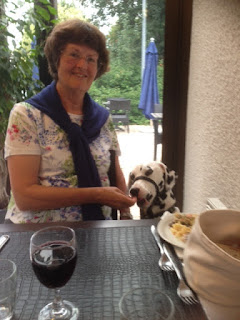 Tuesday 25 th July Awake at 5am and it is hardly light, but we rise even if we don’t shine. Tim has been getting steadily more anxious over the last few hours. He trots after us, crying, as we move about, his nose only inches away from me. Showers, breakfast on the run. Tim would not go for his walk because he wouldn’t leave Bill behind. (I suspect he thinks Bill will disappear again for 5 weeks as he did in March to go to Australia) As Bill was busy stripping the bed, he didn’t want to come for a walk. Anyway, we were ready to leave by seven, bang on schedule. We stopped in Brantôme because Tim was shrieking in the back of the car. I thought he wanted a poo, but when we opened the boot, Tim shot out and raced around the car park barking at the top of his voice. How French residents of the town must have loved us, with a beserk dog being very naughty. Still it wasn’t that early, perhaps 8.30 by then. When I say Tim is in the boot, he has plenty of room and windows he can see out of
Post a Comment
Read more
More posts