"Set in America, England and Wales, Wingspan consists of two stories fifty years apart, of quest and discovery, secrets and mysteries, love and death, betrayal and fidelity.
In September 1943 an American Flying Fortress returning from a mission crashes in Wales. A farmer is first on the scene to discover that its crew of ten have all perished. When the police arrive, only nine bodies are recovered, and so the mystery of the pilot begins.
The pilot is stationed in Suffolk long enough to meet and marry Gail, and together they have a son. It is only when Gail dies just before the son’s fiftieth birthday that he feels able to search for the father he didn’t know. Discovering that his father died in Wales, the son sets out to find the crash site. It is the beginning of a physical and emotional journey which will change him fundamentally."

I have just finished reading this, and am a trifle perplexed. It is all the things the publisher Cillian Press says in the blurb. It is beautifully written. It is not onerously long and presented in good clear font. Reading was easy. But now I'm finished, I don't quite know what I've read.

It is two entwined stories, and I don't mind that. But I do mind not being able to tell, a lot of the time, which story I am reading. I spent time flicking backwards and forwards trying to discover which I I was reading, if you see what I mean.

I do mind that the two stories are told in scraps and patches, with a fifty year gap between the two. I mind that the central question, which made me pick up the book, is never answered. What happened to the missing airman? Was he ever there? Did he live on? Was he the odd figure on the skyline at the end of the book? What are all the letters from the police supposed to convey?

Perhaps it is all just two clever for me. I kept thinking I would get the hang of what it was all about, but sad to say, I did not. Maybe one day I'll try reading it again. Perhaps it will all become clear second time around.

Just to cheer myself up, here's a reminder of the beautiful Northumberland coast on Wednesday. 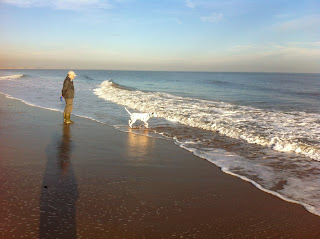 Margaret Scott Chrisawn commented on a link you shared.
Margaret wrote: "Those books, the ones that seem deliberately "vague" and convoluted, are often the ones that win literary prizes because the judges decide that anything that confuses the reading public at large must be wonderful."