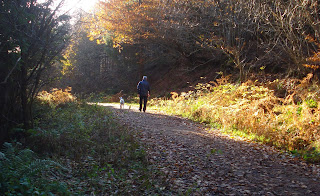 I have now updated Victorian Beauty by changing the cover. It didn't take properly on the first attempt, so I knuckled down, read the instructions slowly instead of glancing over them, and managed it on the second attempt. I have such a bad habit of glazing over when technical terms pepper a screen - especially a screen. The printed page is not so bad, but a screen? As soon as I scroll down and the words vanish from the screen, they also vanish from my mind.

The story has not changed, but the title is now Dark Whisky Road, and the cover has changed to something much more attractive. A photograph of my own, so there are no copyright worries. I took it a couple of years ago on a trip to the Chatsworth Estate. I also took the opportunity to add a piece at the end of the book about the possibility of reviews, and listing my other titles. Threw my blog address in for good measure, and thought about including a picture of myself, but thought that might be a step too far. I didn't want to tempt the gods of Amazon Kindle. 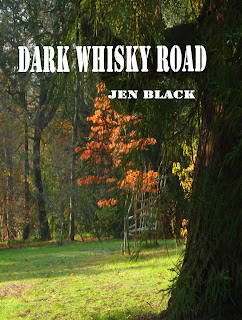 Now I shall have to upload the new cover to the titles listed here on my blog. You did notice all my titles are listed on a separate page, didn't you? I hope so. I updated each blurb just last week. The ones I had were so stiff and formal I could hardly believe I wrote them - and yet I thought they were so good when I first uploaded them.

Talking of photographs, I won't be taking many now until the frost and snow arrive.  We still have an occasional bright day as in the pic of dh and dog in Chopwell Wood last week, but the horrendous winds of Thursday and Friday ripped the the last of the leaves off and brought down branches galore. The autumn colours have all but gone, the leaves are sodden underfoot and the trees are stark skeletons against a grey sky.