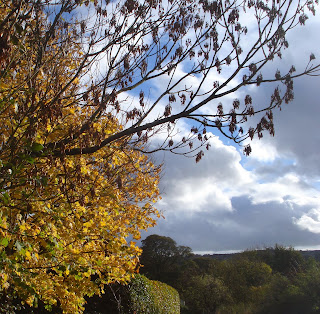 I never seem to have enough time these days. My blog used to be as regular as clockwork but it is a trifle hit and miss now, though I still try to keep to three posts a week. Today I'm in the unusual situation of having time to do it and groping for subject matter. Most frustrating.

We had the first frost of autumn last night. There might have been a tentative frost earlier in October, but it was so tentative it didn't last til midday. When I took Tim down to the river bank today, the ground was frozen. It's been soft and squishy up until yesterday and while Tim romped about and got muddy, I had to keep my eyes on where I put my feet. I still slipped a few times, but didn't go down. Tim, on the other hand, hit a puddle at full speed this morning and skidded off to one side. He came back to sniff the ice, so no doubt he knows what to expect next time.

This sort of weather makes me very glad to be living in the 21st century. I tell myself a Viking hallhouse could be very cosy with the central hearth blazing and everyone wrapped up in furs to keep warm while the harper told a tale or two. But someone had to go out and find the wood or peat, drag it back and keep the fire burning night and day. Someone had to go hunting so there was something to cook and eat. Trudging through snow in leather boots without the thick, textured soles that we're so used to today would be no picnic. Maybe they packed straw and wool inside to add insulation, but there must have been many frozen toes, chilblains and even frost bite.

People complained of chilblains in the fifties, (a painful, itchy swelling on the hands and feet due to poor circulation and exposure to cold) and scorch marks on the skin over the shins from sitting too close to the fire. These things were not unusual even in the early sixties. No doubt they were common in Viking days as well. Nowadays, does anyone under forty know of chilblains? Do they remember running to the kitchen to make a hot drink before hurrying back to the one warm room in the house? A trip outside to the coalhouse to get more coal - no one wanted to do it, and it usually fell to the man of the house. Going to an icy bed was unthinkable without a hot water bottle, and three people in a bed doesn't seem such a bad idea in context of  ye olden days. Body heat times three was not to be sniffed at. Pity those who had outside loos....all these discomforts are mostly forgotten now. But it is life as it was lived in historical novels.