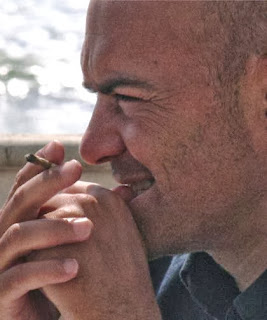 Hard to  pin down. The long promised series of four began on Saturday night on BBC 4, and did not let me down. I've been watching the Young Montalbano for the last six weeks, and while I enjoyed them, they did not have quite the same pull. It was interesting watching the friendships form, and the actress who played Livia was certainly prettier than the original. But now we have a third actress playing the character in the new series. It's odd that  the character seems to never quite gell - either that, or the original actress moved on to other work . It's a pity, because the character is Salvo's long term girlfriend, so she is important.

I like the scenery, but that's not what makes me watch it. I like the fact that it is sub-titled because then I can catch all of the plot. (So many actors mumble or talk away from the microphones today that I miss quite a bit. Maybe the sound engineers are not so well trained? Just a thought.) I like the characters. Ingrid, the very tall Swedish lady for instance, who drives like Fernando Alonso. Fazio who always looks worried. Mimi Augello, who cannot resist an attractive woman. Catarella, who mangles every message and constantly falls into Salvo's office instead of walking through the doorway like everyone else. I was happy for him when it was discovered that he was a whiz with computers.

I like the actor who plays Salvo Montalbano. He's in his early fifties, like the character written by Andrea Camilleri, and he's nicely relaxed in his well-cut Italian jackets that fit his chunky frame so well. He's somewhat bandy-legged, but that only adds to his charm. There's a warmth to him that comes over even when he shouts at Catarella for mangling messages, and the way he handles grieving widows and frightened orphans makes me blink back the tears. He's cunning, easily roused to jealousy and goes into raptures over seafood. All in all, a real character. Long may he continue to delight me. To discover more reasons for my affection, click and read this piece :
http://www.crimetimepreview.com/2012/11/inspector-montalbano-why-its-best-show.html.

The author did not write until he was 53, and he's now 81 and still writing, so there's hope for us all.