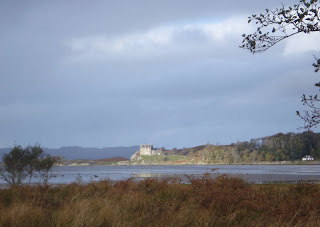 We drove a little way to a dead-end one-track road where we could walk a couple of miles to Crinan Ferry and let Tim run off-lead. It is difficult to find places where he can run free when there's livestock about but we were lucky in out choice. The one field of cattle were safely fenced away from him, and the sheep were roaming the shore of the loch.

There is a little cluster of houses at Crinan Ferry. We guessed a couple of them would be holiday homes. because it is such an idyllic spot, I asked dh if he would like a week's holiday there. 'Not on your  life,' he replied. 'I'd be bored stupid.'
It is amazing how some people choose to live in spots so remote that other people couldn't contemplate life there. I've often thought such a life would suit me, but the closest I've ever got to it is holidaying in such places, and that isn't a true test. Now that we all have computers and chatter away online, it could be argued that nowhere is truly remote any more. I know the Western Isles were keen to take up e-communication when it first became available, and had library and school link-ups long before city dwellers really thought about it. Now we chatter with off-spring in Australia every day if we chose to do so.

We reached Crinan Ferry landing but of course there's no ferry now. It ceased operating in eighteen hundred and something, and was only a rowing boat even then. It must have been a day's walk to get to Kilmarti 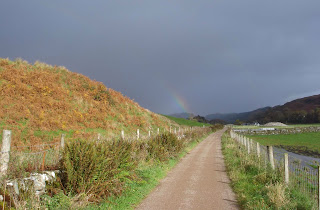 n back then, a village we reached by car in twenty minutes. Perhaps half a day on horseback.

The valley in which Kilmartin sits is green and fertile, and it is ea
sy to see why prehistoric people lived there and built their temples and cairns and burial chambers. The Dunadd, they claim,  is the seat of the kings of Dal Riata. Literally translated, the Dunadd would be the fortress on the river Add. We climbed it on a previous holiday and searched for the famous footprint. We found it, but didn't think it looked like any foot print we've seen. Or put another way, it was like a lot of other odd shaped holes in rocks you find on the sea shore. But if you want to believe it was part of the coronation ritual of Dalriardan kings, I have no quarrel with you. 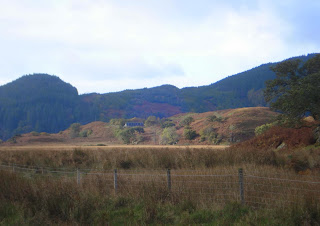 We walked into Kilmartin along the line of the chambered cairns and got drenched in a rain storm before we clambered uphill to reach the Museum and cafe. Because we had Tim, we sat in a small yurt outside the cafe and devoured chocolate cake and drank hot coffee. We had done the museum bit  on our last visit, and recommend it to anyone who visits the area. Once the rain cleared, as it does in Scotland, the sun came out and we walked back to the car and drove back to the hotel for a siesta. We needed it. We must have walked about eight or nine miles.