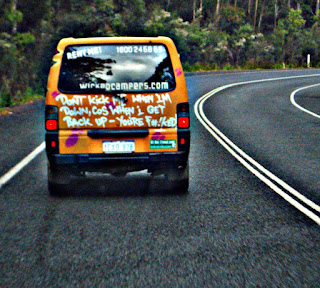 I have set myself a goal. I want to have a new book self-published on Amazon in time to catch the Christmas buying extravaganza. So I've begun second-editing a story for which I wrote a swift first draft some time ago. I've called it Victorian Beauty, and I've reached page 92 of 192. The title may change as I'm not sure it gives exactly the flavour I want.
There's still some way to go, and the ending will require a little more work than the rest of it because I finished it off in a great hurry. It needs more story to complete it properly, maybe an extra two chapters. In between editing, I'll be playing around with a cover as well. That's more like fun. It's good to be back in the mood again after all this time away having fun.

The story is set in Northumberland. After all, why struggle with locations in the south when I know Northumberland so well? why give myself problems?

If you are curious about the orange van in the picture, I spotted it on the road in Australia. Click on the pic to enlarge it and read the words scrawled on it!