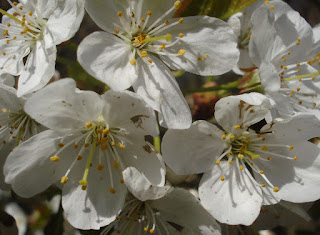 I suddenly realised the other day that I had made a great leap.  Without thinking about it, I have stopped introducng every scene with description and walking my characters off-stage. I first noticed this when I was doing the third edit of what is now called The King's Business and someday I might go back through my other stuff and take note of where and when I made this great leap.
As an English Lit student I knew all about playwrights starting a scene in medias res, but somewhere I had picked up the idea that when writing, a scene had to be fixed in time and space so the reader could grasp it without effort. When I first began writing, almost every scene started that way. It's only when I did a whole-book edit, that I noticed how boring it was. But when I think about it, I'm not sure I noticed consciously. I didn't have a light bulb moment and make a conscious decision about it.

Slowly but surely, my scene-starting changed. Some started with dialogue, some with action and sometimes how the character was feeling.  Interestingly, my scenes also  now stop when the important point has been reached. I no longer take the characters by the hand, walk them to the door and shove them through it.
I've even starting missing out other bits. When I began, I felt obliged to describe every teensy comment, or describe every tiny bit of action in something like a sword fight. Now I'm more capable of editing a scene at the writing stage; describing only the important sword thrusts, if you like.

Perhaps the show-don't-tell mantra was partly responsible for my earlier writing. Hammered home by so many, the trouble is that once you start showing a scene, there's a distinct feeling of obligation to go on to the end.  The danger is, take it too far, and the writer starts describing every breath the protagonist takes. I now think Telling is very useful way of linking bits of Showing, and I intend to go on with it. I even twist it into my protagonist's POV/inner dialogue. I've come a long way, and I'm looking forward to learning even more.
editing fiction in medias res Showing Telling writing

Unknown said…
Writing is one long learning-curve, I find. It's so easy to take the "rules" to their extremes. The thing is to find the right balance, and I'm guilty of wanting to put the poor character through his paces right to the bitter end. I suppose I have to remember, my reader isn't daft :-)
11 April 2012 at 16:12

Jen Black said…
As you say, the reader isn't daft, and the less daft they are the more impatient they may well be with our mistakes!
Jen
12 April 2012 at 10:25