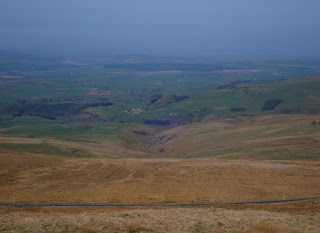 Any minute now I'm going to go into my study, sit down at the pc and kill someone off. I'm not looking forward to it, because really the character doesn't deserve it. But that's life, as they say. Life in 1544, anyway, if you were in the wrong place at the wrong time, say between a rock and the English army in Edinburgh. I've killed people off before in books, and didn't mind. Usually they were baddies, like Moddan in Banners of Alba. In fact I did a shipboard battle scene in that book, with axes, shields and swords. So it's not the bloodiness of it all that worries me, but something else. This death is going to hurt my protagonist, and because I like him, I'm wary of writing the scene. Odd, isn't it? He doesn't even exist outside my imagination, and yet I don't want to hurt him. I've avoided this scene for about two weeks now, but I'm going to have to do it. Today. Now. Well, I'll have a shower first....and then maybe a cup of coffee... The pic is taken while driving over Hartside summit on the Pennines, looking down on Cumbria
Banners of Alba death scenes fiction heroes

AnneMarie Brear said…
I don't like doing it either, but it often happens in my books. LOL
Actually, sometimes I do like the twist a good death will give.
18 April 2011 at 02:08