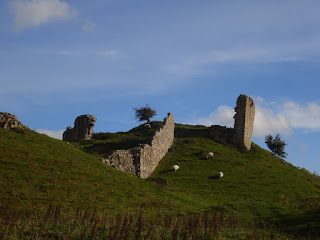 Start reading about castles and strange words start to bounce off the page as you carry on reading. Then you get to the end of the passage and if you are like me, ask yourself, “What did that actually tell me?”
The words are so specialised that no one but architects, and historians with a modicum of curiosity about old buildings will ever understand them. Authors can get tangled up in words like Gothic, Keeps, Tracery and Barbicans. I did, and I’ve spent the last two days digging around in the literature about medieval castles in an effort to understand.
Tracery, for example. It is intersecting ribwork in the upper part of a window. It can be used decoratively in blank arches, on vaults, etc. And that’s not all. Plate tracery is an early form where decoratively shaped openings are cut through the solid stone infilling in a window head. Bar tracery, introduced into England around 1250, where intersecting ribwork made up of slender shafts continuing the lines of the mullions of the windows up to a decorative mesh in the head of the window. Lost yet? I hope not, for we still must consider Geometrical tracery, Y tracery, Intersecting tracery, Reticulated tracery, Panel tracery and Perp tracery. Oh, and mustn’t forget Dagger tracery, Kentish or Split Cusp, and the intriguingly named Mouchette, a leaf shape which lies flauntingly off to one side.
Ignore these words at your peril. Gothic windows are defined by their pointed arches, yes, but then there was the tracery. 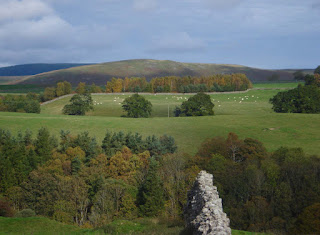 I spent a happy day on Sunday prowling around Harbottle Castle in Coquetdale. A brilliant day, a lovely drive full of autumn colours, and a four mile walk beside the Coquet to round off the afternoon. The Castle had - you’ve guessed it! – at least one Gothic window, because remnants of the tracery have been found among the fallen stones at the bottom of the motte.
Tomorrow I shall hastily go through my already written pages and redesign my version of Harbottle Castle, ignoring the fact that my hero languishes in an upper story where a fire has broken out. Time to rescue him when I've sorted ou the windows.
And then, of course, there are all those other details I've discovered about the gate towers, the drawbridge. and the well in the inner bailey. I didn't know there was a drawbridge when I wrote the chapter!
architectural details castles fiction historical novels research writing