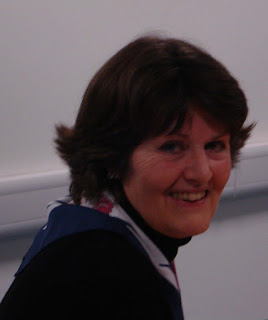 A rare pic of me at the GNI last Friday. Interesting questions come up at the Girls' Nights In and the evening at Haltwhistle was no exception. How do we get our ideas? Simple question, but it makes you think, really think, about where ideas come from and how we execute them. Most historical writers claim to love history, yet there are some books being written today, someone said, that made her think that the writer didn't understand the period she'd been writing.

It is sometimes hard enough to understand our neighbours and next to impossible to understand people ten years younger than ourselves. Does any forty-year-old really understand why twenty-year-olds think as they do? What makes some of them get absolutely plastered? Why drink at home before they go out, so that they are half-way to plastered before they hit the streets? Why do they need artificial stimulants before they can have a good time? Why do football matches turn into battle zones? Why are bankers so greedy?

Understanding how someone living in Regency times understood her/his world is therefore doubly difficult. Then it was fear of French invasion and a strict code of manners and morals. In Tudor England, it is a struggle to understand the stranglehold the church had on minds and hearts, or why burning at the stake was thought to be such a cleansing thing. I wonder how many of us would die at the stake for our beliefs today? Are the Scots still The Enemy, as they were then? (I look at Alex Salmon and wonder) Or the Norman French, who overan England, and relegated the indigenous population to starvation, death or serfdom. We go there for holidays now and we're all great friends, so how can we really understand what it was like then?

All writers have a debt of honour to those who have gone before to get it reasonably right. Therefore, as many have said before me, heroines who live in 1803 and behave as if they live in 2010 are just not on.
historical novels History writing