I needed two pictures and even then couldn't show the whole of the landscape I could see as I stood there in late afternoon sunshine at minus 2 degrees. Nor could I get this silly blog format to publish them side by side, which is what I wanted. However, this is Northumberland, folks, looking west five or six miles north of the Tyne valley where the land starts to rise to the Border hills. Smack in the middle of the one on the left is some sort of ruin perched on top of a small rounded hill. It is listed on the map as Ancient Homestead and Dovecot, doesn't even have a name. We drove right by it as we continued home from Wallington and these little chaps. 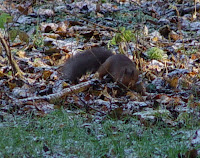 Work continues on Till the Day Go Down. I went through yesterday and added costume detail where I thought it would enhance the scene. Today I'm thinking about landscape, though I think I've layered that in as I went but it wouldn't hurt to check. Anything to make the scene REAL to the reader.

As for loglines....here are my next efforts: "Christian Emer, kidnapped and sold as a slave to Pagan Viking Flane, thinks of nothing but escape and refuses to sleep with him unless he marries her."
Didn't seem right, so tried again:
"Pagan Viking Flane buys Christian Emer as bedmate and then finds he must either rape or marry her before his future wife gets rid of her for good."