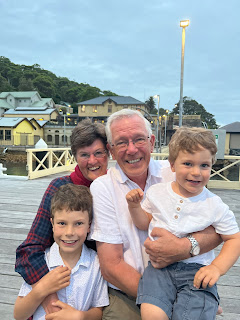 Our Australian adventure is drawing to a close.

Now back in Mosman, where there seems never to be less than 3 lanes of traffic hurling around junctions and turning at right angles in the face of those 3 lanes. Scary stuff. Last night we decided to take our hosts out for a meal. We had all had a long day, but they had driven back from Brisbane to pick us up in Redhead and then driven down to Sydney the next day. Almost 800 odd miles.

A meal at a restaurant on Chowder Bay called Ripples seemed a good idea. The bay used to be a naval establishment - in fact it still is. I chose Barramundi as my main meal and enjoyed it. A chunk of fish that was moist, sweet ad succulent. I can honestly say I have never tasted a better chocolate mousse with cherries on the side plus a portion of ice cream. Two bottles of Cape Mentelle Sauvignon Blanc-Semillion blend from Margaret River and I was in heaven.

Today, Thursday, we walked up Brady Street and onto Military Road. We walked to the cricket ground and then then along the other side of Military Road. Almost every shop is a dress shop, and each seems to have selected a certain colour as their Window display of the week. We ordered a Salami Baguette for Bill and a chicken and Arvo ( Advocado) baguette for me, plus a Florentine to share and we ate it on the bridge between malls (it was peaceful and cooler there with air con working) that crosses Military Road while we sat and watched the traffic flow beneath us. Three lanes heading in one direction, three in the opposite direction and it never stops. A fire engine bundled its way through, and we knew when cars appeared with headlights shining that the  storm was getting closer. We walked around the cricket oval and then headed home. We only just reached shelter in time before the rain came pelting down.

This evening, Monopoly is the game of choice, much to the delight of 7 year-old Alexander.