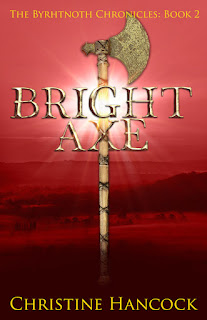 Today I am taking part in something called a Blog Hop. Yes, I know, it sounds strange, but the Interview my Character Blog Hop should prove a thing of beauty for lovers of historical fiction. The basic idea is that I should interview a character! Not the author, but the character. Something I’ve never done before.

Further down the line, someone is going to interview a character from one of my books (look for it on 15th June), but let me tell you which character I have selected. His name is Byrhtnoth and so far he has two books chronicling his life. The first was Bright Sword in 2018 and Bright Axe arrived earlier this year. I understand there is a third in preparation – and since Byrhtnoth is barely eighteen at the end of Bright Axe, I feel he has a long way to go for I know that he doesn’t die until AD 991.

He also has a rather elevated opinion of himself, but I have a sneaking suspicion that perhaps he is typical of men back in AD 947!  Let me tell you that talking to a rather muscular young man over six feet tall, and with a shiny axe hanging from his leather belt, is a rather unnerving experience. Given the chance to ask him questions, my first was necessary for ease of reading his story; here is the snappy answer he gave me:-

Me: How do you pronounce your name? Who named you?

What a strange question. No-one has ever asked me that before. Are you a foreigner? Do people ask you how to pronounce your name?
Forgive me. My author tells me you live, like her, in a different time where the English tongue is spoken in a different way. She says the pronunciation is something like birrt-noth in your language.
Like most Anglo-Saxon names, it is made from two words. The first, Byrht, or Beorht – it can be spelt in many ways, means bright. Noth means bold, daring, courage. It is a good name for a warrior. I think my father, Byrhthelm (guess what that means!), named me well.

Me: Are you related to anyone famous?

I have connections to Lord Athelstan, Ealdorman of East Anglia, sometimes called half-king because he is second in power only to the king (some would say more powerful!) His wife fosters the younger son of the king; the late king I should say, Edmund died last year, his brother, King Eadred rules now.

Me: How old are you and how do you keep track of passing years?

I was born in the year 930, in the reign of King Athelstan. I had reached the age of seven years when my mother died, and I left my home. I was taken to Winchester to be trained with a group of other boys. That was shortly after the Battle of Brunanburh, when Athelstan defeated all the kings of Dublin, Alba, Strathclyde and a few others. I suppose that would make me close to seventeen years. I am a man, that is all that matters.

(H’mmm. I notice he didn’t tell me how he kept track, but I didn’t dare to probe further. Perhaps that axe at his waist has something to do with it.)

Me: Are you pagan at heart or wholly Christian?

I am a Christian, like most of the inhabitants of this land. Not that I think about it much, I go to church when I have to and complain at Lent and other fasting times – I have a dislike of smoked fish. My friend Wulfstan, who spent time in a monastery, tells me when I break the rules.
Some say that the old gods are better for a warrior to pray to. I know men who do so, it doesn’t bother me.

(Not an ardent Christian, then. Interesting.)

Me: What do you think of women? Should they have equal rights with men?

Don’t ask me about women. They are a complete mystery. I suppose it comes of being brought up in a gang of boys. I met a girl last year, very pretty. She smiled at me, I thought she liked me. I thought she would like me more when I rescued her from the Viking raiders. She didn’t, although that might have been because I nearly drowned her. They say she’s too good for me, perhaps she is; her sister was married to the king - the one who died.
Why can’t she be more like Saewynn? Saewynn was her maid, she travelled with us to rescue her mistress, but they had a falling out and Wulfstan brought her to the village.  I can talk to Saewynn, she’s like one of the lads. She’s good at sewing but, can you believe it, she wants to learn how to fight? She’s not bad at it, so why not let her have a bit of fun, before she grows up to marry and have children. She says she doesn’t want to get married, although the only alternative is to become a nun. I can’t see her as a nun, like my sister, Edith. As a nun she could run a nunnery, or even a monastery; some have more power than men.
Women have some rights, why would they want to be treated the same as men?

Me: Were you taught to read and write?

Of course I was taught to read and write; the monks at Winchester tried to beat it into us. Some absorbed more than others. I can read well enough to understand a letter, and I can write my name. Wulfstan was the best scholar amongst us. Just as well. After he was injured, he was unable to become a warrior. Now he writes down whatever I need.  I understand he sometimes reads whole books, for pleasure. Can you imagine such a thing?

(I’m siding with Wulfstan on this one – and keeping a wary eye on that axe...)

Me: Do you find it difficult to travel the country when they are so few maps?

I don’t have a problem. It’s easy enough to tell North from South, from the sun. It rises in the East – or has that changed by your time? There are roads, the main ones were built by the Romans, many years ago. I have travelled between my home and Winchester sometimes via Lundon, where there is a bridge across the river. In fact, rivers, and the sea make for easier travelling. Most major towns are situated on rivers.
I have been as far west as the Severn river, that was when we were following the trail of those raiders, then I walked through Mercia, before making my way home. I followed the old road called Watling Street, then took a ship back to the Wash.
I spent Christmas at Lord Athelstan’s Hall at Rendlesham. That’s close to the coast and I have sailed from the river nearby. Soon we head north to fight in Northumbria. I hope I go by ship, it’s easier than walking, or even riding.

Me: Do you have a picture of the British Isles in your head?

I know the shape of the land. The monks at Winchester had a map. It was made in the time of King Alfred and copies were sent to other monasteries. We boys were learning to serve the king, to become the advisers of future kings. I studied it carefully, especially the sites of the old battles. We were taught how close we came to being overrun by the Danes who came from the lands to the East and how King Alfred divided the country into two. The kings who came after, took back the lands all the way to the border with the Scots and other barbarians, and even beyond.

I know how difficult it is to protect our land from foreign invaders. The Welch to the west are quiet for now. Beyond is Ireland, where some Norse kings have settled (that’s where those raiders came from!)

Beyond the sea to the south is Frankia and other lands. We are at peace with them, at the moment. King Athelstan married several of his sisters to kings there and monks travel to foreign monasteries, even to Rome. I met someone once who had travelled to Byzantium, I wonder if I will ever go there.

It is the North that interests me. You might ask where in the north, but I cannot answer. My father, the man who named me, left shortly after my birth and never returned. My mother and I thought he must be dead, but I have been told that he still lives. I swore a vow to find him, but where to search? I studied the old map and questioned anyone who had travelled that way. I know there are great mountains and many islands, scattered in turbulent seas. I must go, but my duty to my lord prevents me. Perhaps I will find news of him in Northumbria.

I hope your questions are now at an end as I have better things to do. I see Saewynn glowering at me from the door, I am late for training. That’s if I can move after sitting here so long. If I have missed anything, Wulfstan will help you. He has been scribbling down all my words and indicates he is running out of ink.

Or ask our author. She knows everything: past, present, and even our future. I wish she would tell me if I ever succeed in my quest. All she will say is that I live a long life and will be remembered in a famous poem.

Must go, my throat’s dry, anyone got any ale?
Written at Rendlesham, Easter 947 by Wulfstan, clerk to Thane Byrhtnoth.

Me: Thank you, sir, for answering me so well. (Quite a character, our Byrhtnoth!)

Now for the books:

Would you believe Byrhtnoth has his own website? I imagine Wulfstan must have laboured long hours over it, so please take a look.
www.byrhtnoth.com

What an intriguing interview! I must admit I'm quite partial to a tall, powerful warrior. And Byrhtnoth did not disappoint... :-)

~heads off to look for the ebooks~

You're definitely a resourceful young man! It was very good to meet you, Byrhtnoth. I wish you well during the next phase of life and thank your author for allowing you to give us an idea of your position and some of your distinctive opinions. I'll be looking out for you... and your axe very soon!