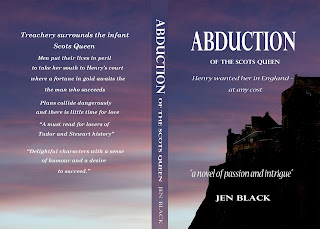 A post from Amazon at 8.46 this morning told me my paperback ABDUCTION OF THE SCOTS QUEEN, with updated cover and interior, is now for sale. We won through!

The final stage was to adjust the spine, where the font had run down into the area that would be cut off when the book was finally trimmed. Having used a smaller font, I moved the sub title and author name further away from the bottom edge and it seems to have worked. Also Bill re-sizing the template to suit their requirements helped. (I respectfully suggest that the template be rendered unchangeable in future.)

So, the paperback and the e-version are now available. There is a "Look Inside" facility and for those people who were kind, or brave, enough to buy my early version, the basic story has not changed. I have corrected the odd typo that crept in, taken out the unnecessary words - mostly dialogue tags - and generally improved the formatting. Kindle Create helped with that on the ebook, but as yet those nifty little separators and themed chapter headings are not available on the paperback versions.

Here are the links and the opening lines: http://amzn.to/1wQTs7F UK

Northumberland, October, 1543
Dark fingers of shadow stretched across the valley toward the old sheepfold as the sun dipped behind the Redesdale hills. Inside the broken ring of stone, Matho Spirston, grumpy with unease, crouched over a fire and turned a spitted coney. The crumbling walls of the sheepfold gave some protection against the cold wind, but he was very much aware they gave none against the lawless men of Redesdale. Full dark would come soon, and it would be a rare night if the reivers stayed warm and snug in their beds once the moon rose.
“Damn!” He sucked away the sudden sting of hot fat.
Harry Wharton, his back propped against the wall, stopped honing his eating knife against a chunk of stone. “Jittery, are we? You can always ride back to Aydon and waste your life away as Carnaby’s Guard Captain.”
Matho snorted. “Aye. But like yer Da said, you’d never survive on your own.”
Harry smiled the insult away. “The thought of silver must tempt you?”
Matho grimaced at the flames. “Aye, but it’s a chancy business, snatching a queen.”
He still found it hard to believe that Harry’s father, Sir Thomas Wharton, Deputy Warden of the English West March, had suggested that they should ride north and see if they could snatch the infant Scots queen from her cradle with the aim of delivering her into King Henry’s hands. “If stealth fails, we are authorised to take her by force.” Even Harry had spluttered at such a statement.
“I doubt the Queen Dowager of Scotland will agree to that,” Harry had exclaimed. “The child is barely two years old.”
“She is not yet two years old,” his father had replied.
Running a finger lightly across his newly sharpened blade, Harry gazed across the fire with an amused glint in his eye. “You don’t fancy wearing silk shirts and owning a decent horse?”
“Silk shirts are nae use to a dead man.”
“True.” Harry sheathed his knife and rolled his blue eyes heavenward. “But wives, I’ve found, are an expensive commodity.”
So his new bride drained his purse, did she? Alina Carnaby was a demanding young lady, as he knew to his cost, but she had a pretty face. “There’s surely compensations,” Matho said as he turned the coney on its stick. “Like a warm bed on a cold winter’s night.”
“That’s true, too.”
“Your Da will dig his fist into King Henry’s gold, if you ask.”
“Ha! I have to earn my own gold.” After a long pause with both of them watching the coney turn brown, Harry said, “We’ll be across the border tomorrow.”