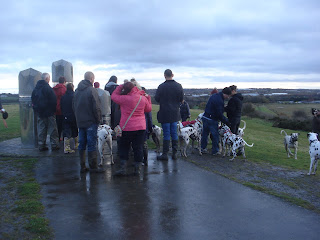 Did something new on Sunday - attended a Dally Rally. For those not in the know, this is a Dalmatian Rally where Dalmatian owners congregate on a nice open space and walk their dogs. Sounds simple enough. Exciting for the first time Dalmatian!
The Rally was at Weetslade Country Park near Cramlington and about 23 Dalmatians and their owners turned up at 11am.  It was quite a sight.
I had wondered if I would be able to recognise Tim when he was in among all the other spotty dogs, but there is such variation in the size of the dogs and their individual pattern of spots that it wasn't a problem at all. 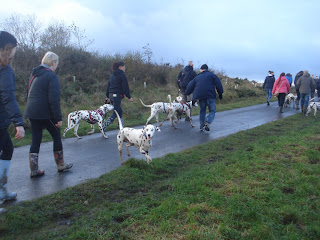 It was a dull, cloudy day and the ground was waterlogged after so much rain. That wasn't a problem. Wherever we walked, the problem would have been the same, and Dalmatians need their daily exercise. Everyone was equipped with waterfproofs and wellies and prepared to give their dogs a bath when they got home.  The fact that quite a few had become grey or even black dogs just seemed funny, because others stayed spotlessly (sorry!) white.
Tim was raring to go while on the lead so I let him loose so he could run with the others, who were haring off in all directions. He ran a little way and then hesitated, not knowing which way to go or which dog to follow. Then he turned round and couldn't see me in all the confusion. Panic! He set off at top speed back to the car which all things considered was a sensible move on his part, except that I was only ten feet away in the opposite direction! Lots of calls and whistles brought him back. Every time he lost sight of me there was a moment of panic, but eventually he got the idea and began to run with the others. He and a young lady called Nova seemed to take a fancy to each other. It was such fun for him, and next time he'll be more confident. The added plus was that he slept for the rest of the day!