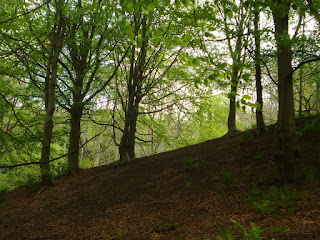 The best advice I ever read about first chapters was “re-write it.”
(The theory behind this advice is that the author is thinking her way through the facts of her characters and story when she first writes Chapter One., so it is usually crap.)

I did that. Scrapped chapter One, and started with the original chapter 2. (But I wasn't so daft that I didn't keep a copy on my hard drive and a memory stick, just in case!)

Other advice is Start where the conflict begins, and include action. Don’t go into detail about characters that are never mentioned again. Ensure there is a flavour of the genre and a sense of setting and period.

So I removed all the exposition, and gave tantalising clues about future action. But somehow I never really loved that second version of my story.

Months later I decided I wanted the original first chapter back again to give a real feel for what was happening in the book. So I got out the original Chapter One, pared it down to the bone and added some character conflict between Matho and Harry to the main conflict because I know the characters so much better now after two years writing and re-writing.

Suddenly sentences started flowing together in a way they never had before. Three bald sentences collapsed down into one graceful sentence and I thought I was really getting somewhere. Since it's a story with more than one viewpoint character, I decided to give my second protagonist, Meg, space in chapter one. After all, she's a large part of the conflict.

But now I have a fairly long first chapter. How long is too long? Where should I make the break? But at least the conflict is set up, and there are clues that my two main protagonists are destinied to clash head-on before too long.
chapter length characters conflict first chapters

Derek Birks said…
To be honest, I think a lot of rubbish is written about first chapters. The points you mentioned are all sensible and desirable but sometimes, as in your case, it doesn't feel right. I rewrote the first chapter of Feud several times but returned in the end to some of the original stuff. What matters is not some formulaic correctness but what readers warm to. The first chapter can be any length as long as it carries the reader with it.

Jen Black said…
Posted on behalf of Maggie Chrisawn: The chapter is long enough when it says all it should say and ends with a nice bit of suspense. There is no magic length, just as there are very few other valid "pronouncements" from all these self-proclaimed gurus about writing. Most of them haven't written a line of fiction themselves, or at least none I'd want to read. Stop second-guessing yourself already--you're much too good a writer for that. And you've heard me say this before, so there!
27 May 2013 at 20:57

Jen Black said…
You are both right, of course.
But I am amazed at the improvements I've made. I don't think I've lost the original voice, either. I guess it's clap myself on the back time!
Jen
27 May 2013 at 20:59