A day in York 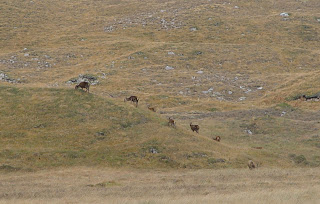 Yesterday did not start well. Hair took forever to dry and did not style easily. Sometimes it just falls into place, others, it goes everywhere but where I want it to go.  Then strap broke, so had to select another garment. On the road to York,we saw signs announcing certain A1 junctions had been closed. This provoked much comment in the car about which junctions had been mentioned, where they were and if it would affect us.
End result - we found ourselves involved in a 3-lane halt-and-crawl for at least an hour and half, thus extending our journey time  to twice what it ought to have been. To add insult to injury, when we finally did arrive, York was freezing. A vicious wind slapped through every open space, and it is lucky we were to be able to scamper into the narrow, twisty, enclosed streets of the old city which kept the wind out. Fenwicks cafe was a nice warm haven as we wern't prepared to stand in the queue for Betty's tea rooms, though Penny would have enjoyed their quaintness.
By four o'clock we were ready to leave via the A19 rather than the A1 and lo and behold we inched our way out of York in another nose-to-tail crawl - this time because the ring road traffic blocks anything coming out of the city. The York city council should start thinking about fly-overs and under-passes to ease the traffic flow. It'll be years before I think of going to York again!
I finally got hold of the pics on dh's camera, which has a much better range than mine, and discovered this pic of the deer we saw on our drive north to Inchnadampf. On my camera, they were nothing but tiny brown specks. Click on this one to enlarge it, and see what they really looked like!
deer Inchnadampf. traffic York