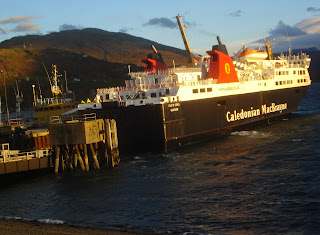 The gorse was blooming for the second time along the river banks in Ullapool, and I've just realised we weren't plagued by midgies at all. Our second night in Waterside  House the wind kept the ferry in port and made walking out to find a meal unpleasant. We tried the Ceilidh Place but it was overun with young people, cables, sound systems and we dedeuced that a gig was taking place that night. I think we could have stayed, but it would have cost us £10 each on top of the bill for food and wine, and our eardrums are not accustomed to the atomic blasts of sound these groups generate. We found somewhere else! 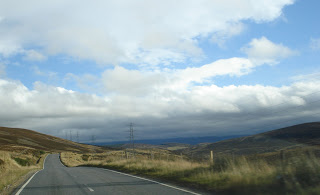 Next day we set off back to Inverness and had a splendid drive across the moors and down through the autumn woods to Garve, where the land changes slowly into lowland scenery. Green, fertile and gentle after the north west.  Climbing the hill out of Inverness heading south on the A9, we turned off onto the A938 and headed for Grantown on Spey, where we stopped, had a coffee and walked through the town and across the wetlands to the river Spey. Halfway around the town, our mobile phone rang and the family wished me happy birthday from Australia!  Many years ago I'd been here, and remembered huge pine forests running down to the river, which tumbled over rocks at a huge rate of knots. The river we saw was a disappointment, and there were no pine trees. Instead we had to detour under a new by-pass that has been put in, and the river was flat, brown and uninspiring. Disappointment all around. They say you should never go back, don't they? So we headed out on the  939 through Lynemore and Bridge of Brown to Tomintoul. Pretty countryside, and so very different to the north west!