A lot of bull! 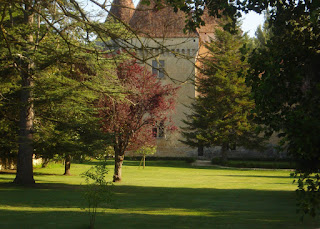 days have turned sunny and hot, we've been doing it early in the morning, before the heat begins to bite. Yesterday we passed the Chateau Maurice at the end of a long walk over towards the holiday village of Constant, and today we went in the opposite direction and found ourselves deep in the woods.
Not a problem, even though imagination suggested that if I were walking on the north American continent, I wouldn't have been so happy, knowing that a bear might appear around the next corner, or a cougar be lying in wait along some branch. But I prefer my forest trails with vistas, and this one was simply flat walking along a muddy trail with scrub and trees either side. Nothing to look at until eventually 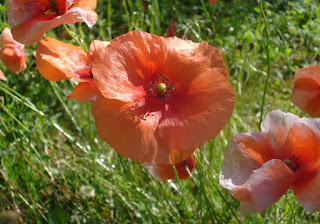 we struck out into rolling hills and fields again.

Admiring a vast field of grass sprinkled with blue flowers, I got down on my knees to take a photograph and heard dh shushing me and pointing to something in the bushes behind him. Not five feet away lay a huge white bull, no doubt rudely awoken from his night's rest (by us). His back end, facing us, looked as big as a house and since I have little faith at the best of times that the single strand electric fences the French use would keep an animal of his size away from us if he chose to disregard it, we hurriedly tiptoed away down the track.
The blackberries are out here, and are ripening fast. We've collected a few and plan to make a blackberry crumble, maybe with some of the plums growing in the field mixed in. Right now as I sit by the open window with the sun pouring in, I hear the rustle among the hazel trees and catch a glimpse of a red squirrel scampering through the branches.