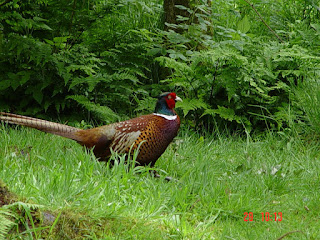 For those who may never have a holiday in England, this bird is a pheasant. Its body is about the size of a football and when the sunlight gleams on all those irridescent feathers, its a handsome creature.

Today I thought I'd give you another excerpt from SHADOWS and I've chosen the very first night at the mill, when Melissa has opted to sleep on the sofa in the iving room rather than share a bed with Rory. So, here we go....


Melissa looked at her watch. It was well past midnight. The sofa was comfortable, but the unaccustomed heat kept her awake. Spending summer in a romantic old water mill in the Dordogne did have disadvantages. When she ran tentative fingers over her flanks, her skin was slick with moisture.
The warm breeze from the open window moved through the room, but brought little relief. Crickets chirped so vigorously they might have been sitting on the hearthstone five feet away. A cold drink would be good. She scrambled off the sofa and tiptoed across the floorboards, hoping she wouldn't step on any insect life. With her hands under the kitchen tap, she welcomed the gush of cold water, gulped some from her cupped palm and ran her damp hands over her face.
Fumbling her way through the shadows to the door, she released the latch and stepped outside.

That was better. Cool air breathed across her skin. Ignoring the quick rustle of lizards scurrying toward crevices in the old walls, she strolled to the chairs, pale and cold in the moonlight.
She sank into one of them, and flinched at the coldness of the plastic against her skin. Stars blinked above the massed ranks of dark trees. A breeze that never reached the valley floor swept across the topmost leaves of the tall trees in the meadow and produced the soft susurration in the air that was already familiar to her.
Rory slept in the big bed on the other side of the wall. He did not like their current sleeping arrangements. The tightening of his mouth, the flexing of his jaw muscles had shown that, and said very clearly that he'd let her have her way but he was not the kind of man who gave up easily. Had his pride suffered when she refused to share his bed? He had certainly been surprised. Would he try and persuade her, or sulk until she gave in?

It had been a good decision not to let Rory sleep on the sofa for then she would have felt beholden to him. Much better that she owed him neither gratitude nor thanks at this point.

She stroked her thighs. Already the slickness dried from her skin. A wisp of long grass whisked along the flagstones, breathed across her foot and vanished. Rory had shown her a shed snakeskin as a warning not to be frightened if she saw the owner one day. The fragile, almost translucent skin had been trapped between the stones of the bolly and the old drain not four feet from where she sat.

A cold breeze wandered by. Melissa hugged herself against the sudden chill. Perhaps this was a crazy idea after all. Flickers of movement caught her eye. For no reason, her heart thudded in her chest. With her teeth pressing on her lower lip, she stared at the western end of the bolly where one of the four oak pillars supporting the tiled roof stood out sharp and clear in the moon's glow.

Beyond them, the shrubs and rose bushes were gray against the dusty, moonlit ribbon of the drive. Nothing moved. She heard nothing but the soft sound of the breeze, yet her heart bounced faster, as if she were in danger. Muscles tense, she sat poised, ready to run.

The shadows made it difficult to see anything. The blackness moved and twitched close in against the house wall, less than ten feet away. A pale shifting blur morphed into hands and a face. Melissa's fingers clung to the chair arms while she strained to see through the darkness. Hair lifted on the back of her neck and goose bumps sprang on her arms. She stared at two pale blurs, one above the other, moving very close together. Sure it must be some young couple seeking privacy, she opened her mouth to call out. But some instinct held her rigid and silent. What if they weren't real?

Her heart beat so loudly that whoever lurked by the wall must surely hear it. She forced herself to inhale slowly and quietly. Her heartbeat slowed a little. The air around her was cold. It's always cold when—she slammed down on the thought about ghosts before it formed in her mind. She looked at the space between herself and the door, and the door and the dark, shifting shape.
She could reach the door. She had to.

The chair scraped across the flagstones and drowned the slap of her bare feet as she hurtled into the mill, slammed the door and rattled the bolt home.
Flexed from the hips, palms braced against the half glass door, she waited, mouth open, panting. Through the mottled glass and the wrought iron Perigourdine goose that guarded it, moonlight lit the grass beyond the bolly. Nothing moved. Her breathing slowed. She remembered she'd seen a baseball bat by the door and groped for it without taking her gaze from the door. The smooth wooden shaft came comfortingly to her hand.

Something creaked behind her. Melissa whirled on a sharp indrawn breath. The bat cocked and ready, she watched the door to the hall open. A large, shadowy form ambled into the living room. "Wha's the matter? Did you shout?"
"There's somebody out there."
"Out where?"
"On the bolly." She flung out an arm and rattled her knuckles on the goose guard. "Ow."
Rory ducked his head, ran both hands over his face. Straightening his shoulders, he walked toward the door. "I'd better have a look."

Melissa stepped aside. He stooped, fumbled for the bolt in the gloom and pulled the door open. Melissa held out the baseball bat. "Take this."
Rory blinked at the three feet of pale, solid wood and made no move to take it. "I could kill someone with that."
"Take it." She thrust it into his hand. It seemed imperative he have some protection. There was something nasty out there.

Reluctantly, Rory hefted it and stepped across the threshold. "Put the lights on."
Melissa pushed the door curtain aside and ran her palm down the bank of switches. Light bloomed inside the mill, and floodlights snapped on at each end of the bolly. Startled birds squawked, complained and clattered about in the trees.

"There's nothing here, Melissa. Come and look." He sounded wide awake.
Suddenly aware that she was wearing only a tee shirt, Melissa whipped the door curtain across her hips and peeped around the doorjamb.

Moonlight emphasized the broad shoulders tapering down to a lean waist and flat stomach. Wrinkled, striped boxers hung low on one hip. His hair stuck up about his head, and the baseball bat dangled from the fingers of one hand. The width of his chest and the prominent muscles of his arms and thighs were reassuring.

"They might—" Her breath caught in her throat as all her initial attraction to Rory rushed back and choked her. She coughed and tried again. "They might have gone round the back of the mill."