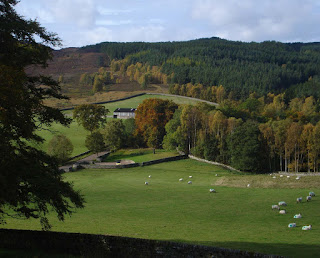 Then castles began to get really complex.
Henry I allowed his nobles to build castles, and forebuildings (also called a barbican, or hornwork) made their appearance, projecting out sometimes twenty feet to protect the castle's main gate. The base of the forebuilding might have a trapdoor through which unlucky prisoners were dropped into a dank cell, and the upper floor, by contrast, made a good chapel. The roof area became a fighting platform in time of need. Formidable defences were built into the area around the entrance. A drawbridge plus pit was near normal, a portcullis which slid down into place at the drop of a lever an enviable extra.

There was often a stone passage way leading to a second, internal gate, and one or the other, sometimes both, had murder holes above so the inmates could throw down whatever they fancied on the men attempting to break in.

Farmhouses on the English side of the border needed to fortify when the Scots continued to attack, and Aydon's owners received permission to crenellate from the king. At the top of castles, there is usually a walk way, or wall-walk, sometimes called an allure, or an alure depending on your choice of spellings. Sometimes there’re on the inside, and men hide behind the stone merlons of the parapet, and shoot through crenels or gaps in the parapet. At other castles it was possible to step through the crenels onto timber boards running outside the castle walls. The structure looked like a timber roofed gallery running around the outside of the castle, and it allowed the men inside to shoot arrows and drop damaging items on their enemies below. If the enemy tried to burn down the gatehouse doors, hoardings allowed men to pour water down and put out the fire. 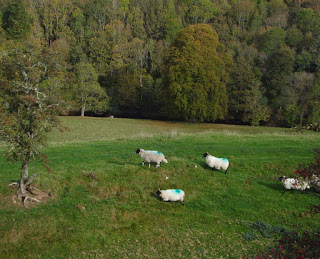 A lot of thought went into making castles impregnable, but the unbelievable did happen. One castle went into siege mode only to find that the stream feeding the vital well dried up due to the hot weather, and this happened not once, but twice.
The first pic looks west from the curtain wall towards Alwinton. The second looks down from the motte towards the river Coquet running fast beneath the trees on the north side of the castle. The sheep were anxious to get away from us interlopers in their nice green domain.
castles crenels fortified houses