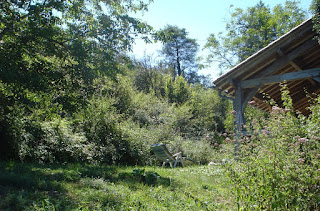 Is there a danger of revealing one's own personality in fiction writing ? I promised More on that Tomorrow, so here we are.

Some books are written with a message at the heart and give out constant little drumbeats of reminders in the pages. Assuming that message is meaningful to the author, and by that I mean verging towards the really, really meaningful, then I suppose some of the author’s feelings have been revealed. But the average reader won’t know unless the author states publicly, via a blog or during radio/newspaper interviews, that she or he cares deeply about this particular topic. And the chances of the reader knowing that fact and remembering it when reading the book must be quite slim.
Imagination is a wonderful thing. It's my belielief that no correlation of assets and traits can be assumed between an author and her protagonist. A book full of adventure and brave heroics may have been written by a sit-at-home-never-do-anything-type person who has a wonderfully fertile imagination and learned the difficult craft of writing believable fiction.
Every writer who has written a sexy love scene and then cringed as she thought Help! My mother, father, or aunty is going to read this knows what I mean. And of course, the stock and truthful answer to any smart comments is But I made it all up! It’s not true!
How many writers write real love scenes? Scenes that accurately recall their own sexual experience? Or detail their private, personal love habits? Very few, I would suspect. A germ of reality may be there, but much embellished and polished. (Not to say that authors don't have great sex lives; it's just that I don't suppose they put it all on their pages for everyone to see!)
How many writers read love scenes written by other writers, like a phrase or a word and use it in their own work? How many love scenes have been written and read over a person’s lifetime? Thousands, and some of it gets reproduced. Not exactly plagiarism, but a sort of template that sticks in the mind and twists according to need and personality when a new book is being written. Many years ago I read a Stanley Winchester book. The only scene I remember from the whole damn novel was Him making love to Her on the Telephone table in the Hall with Windows onto the street while She continued a telephone conversation with her Mother.
Now why has that stuck in my mind when the rest of the book has vanished? Because it shocked me. Surprised, jolted, maybe. I wasn't shocked in the censorious this-should-not-be-printed way, but that someone could contemplate such a scene.
Now, I haven’t had any of my characters make love on a telephone table in the hall (the fact that they didn’t have telephones in the sixteenth century may have something to do with it) but the “template” of that scene is always lurking there at the back of my mind, and I can find many ways to translate that into my stories (with or without a telephone).
Not many care to write of their personal knowledge of sex, I would guess. For one thing it would be a violation of their private relationship, and for another it’s a rare man or woman who constantly experiences the kind of swooning rich passion and fulfilment authors give their lucky heroes and heroines. In spite of detractors of Harlequin, Mills & Boon who claim the contrary, we all know real life just isn’t like that.
On other themes - death, rivalry, injustice - many of the same argument might be applied. But these themes often do resonate with writers, and may well be a public telling of a personal event. In such cases, it seems to me that people could match a book theme with an author’s personal demons and that the author wants this to happen. If the writer doesn't want publicity, the only people who will know the truth will be close friends and family. If they know already, why worry that they will read about it in your book?
fiction personal experience writing

Vicky said…
Some really good points there, Jen. (Regarding love scenes, I suspect some of them are what we would have liked to have happened...)

In some ways, I do think authors reveal themselves, not in their specific words on a topic, but rather in the themes they choose over and over again to explore. What lately I keep hearing referred to as author branding. We write about what interests us. Now, a lot of us have very ecclectic interests, it would appear at first, but scratch the surface of the author's works as a whole and underlying themes emerge: dysfunctional families, power struggles, love conquers all, the little guy gets justice over the corrupt big guy, etc. They're the things readers learn to expect from an author and, in fact, subconsciouly choose the author for.
30 August 2010 at 07:06

Jen Black said…
Hi Vicky. Selecting certain historical characters to write about does reveal an interest, as does choosing women's rights or paranormal as a theme. But I'm not certain that reveals quirks of personality you wouldn't want revealed to the general public. What about the counter argument that an author selects a theme they think will sell?
Jen
30 August 2010 at 11:15

Savanna Kougar said…
Great topic, Jen. From what I've heard other authors talk about on this particular subject -- only a few them choose themes because they supposedly sell. Now they'll choose to write hot trends like some of the paranormal subgenres. Unless, you make a brutally conscious effort, I must imagine writing a novel is like your handwriting... yes, it can change, vary, but it's still reveals essentially who you are.

My heroines are always aspects, facets of myself. That's just the way it is. I make no apologies. And, I don't really care about writing any other kind of heroine. I know some authors thoroughly enjoy writing heroines who they have nothing in common with. I say to each author her/his own and let the reader benefit.
30 August 2010 at 20:48

Leslie said…
I too believe that some Authors may describe love scenes that they would like to see happen for themselves, and I would guess in some cases it could be very close. Imagination is so very important in writing, new material, not just the tried and true over and over.
I am a new follower and hope you will stop by and visit me at http://www.wrighton-time.blogspot.com
31 August 2010 at 04:02

Savanna Kougar said…
Jen, I enjoy writing male characters as well. In fact, one of my books is written only from the heroes POV. It was the first one I ever tried like that. However, I think it worked for the story. And, it has gotten some high reader ratings.
31 August 2010 at 11:33