The nose of the beholder 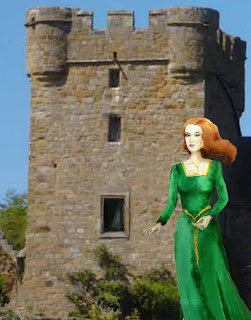 my new book should appear on the shelves.
Till the Day Go Down by Jen Black. Since I don't have my publisher's permission to put the cover up yet, I've amused myself by playing with a painting of the heroine I did when I began the story, and a photograph of a castle that features in it.
I like to visualise my characters and painting is often a good way of getting a likeness - if a bit styalised and impossibly wasp-waisted - my husband's comment! But who cares? Heroines are never stodgy, are they? They don't have pimples or a sudden outbreak of zits at a crucial moment in life. Even in the most desperate of situations, their clear skin and beautiful eyes never let them down. Me, I get bags under the eyes from sleepness nights, and I get a lot of those when I'm worried.
Come to think of it, heroes never have bad breath or stink of horse manure. They always smell of male musk or some such enticing odour. I don't know about you, ladies, but a man who has been doing something active and energetic often smells sweaty and many times it is not a turn-on. Especially if it is more than a day old. But then perception is all. When I worked for a living my staff came to me with a complaint about a client in the library. His smell, they complained, made them feel sick, and the other students were leaving in droves. Upon investigation, their complaint was justified, so I had the unpleasant task of warning him that he must leave and not return until....all was well for a few days and then gradually the smell got worse again...I asked a senior member of staff to intervene. (ie get rid of him!) She came in, spoke to him, and told me she did not find his odour reprehensible at all. What can you say to something like that?
beauty perception smell Till the Day Go Down

Linda Banche said…
Ah, for the world of the romance novel. The hero and heroine are always gorgeous, everything turns out right, and everybody smells good all the time. In romance novels, a sweaty man smells of musk and male. Unlike real life, where the only word to describe a sweaty man is "stink"!
13 November 2009 at 14:24