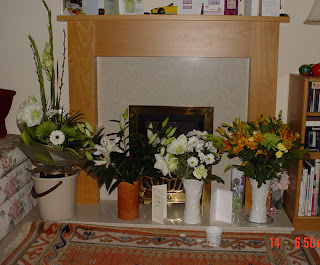 A wine cooler and a bucket have been pressed into service to hold the flowers that keep arriving. People are so kind!
More than usually at the mercy of the tv schedules these days, I recorded Die Hard 4 and sat down with high expectations to watch it.
It is hard to convey the growing sense of unease it gave me. The spirit of heroic adventure pervading the first John Maclean movie degenerated into a comic strip cartoon within the first few feet of film and I half expected the BIFF, BANG, KRUNCH explosions to litter the screen. I grow weary of 30-year old teenagers who rush into supposedly complex situations, size them up in a split second and start pushing buttons - the correct ones, mind you - to avert the catastrophic explosion that will blow them to kingdom come if they get it wrong. I worry for the state of society when it is OK for a determined cop to career down a motorway in a juggernaut hurling innocent road users to certain destruction but who demands that the entire united states airforce must be deployed to save the daughter of that same cop. Promise me! he cries, ramming another innocent victim against a motorway pillar. I despair of films that show villains bouncing off concrete buildings and falling out of helicopters without so much as a bruise, or leaping gymnastically (and impossibly without a springboard) around lift shafts and turbine rooms.
And surely jet pilots are trained not to blow up civilian infrastructure including motorways in case they kill hundreds in pursuit of one man? Let's hope so.
One has to wonder what films such as these teach young people today.
Certainly not kindness, nor selfless bravery to save others. I could possibly have argued the John MacLean of the the first film wanted to save his wife and the people with her. But this hard-bitten version of the hero went on a rampage and it wouldn't be going too far to say he caused more damage and loss of life than the villains.
Die Hard 4 education films Society

Carolin said…
I so agree with you! But then, collateral damage has become something that we don't even flinch about anymore.... Die Hard is just like that old series Miami Vice - a staple of cop movies/series.... A friend told me just this weekend that any movie without sufficient wham, bang, explode doesn't cut it - the short attention span of the viewers can't handle anything more complex. Action, action, action - actually not much different than what writers are supposed to do in their books, don't you agree???
23 November 2009 at 02:44