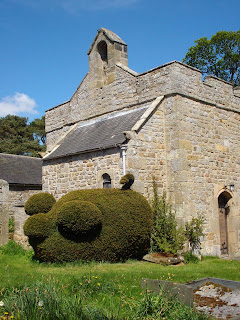 I love this place and not just because of the church mouse!

The walk on Wednesday paused here at Halton Church while we sat and enjoyed the view across the valley. Records say there was a church of some kind here in Roman times, and certainly the arch inside has a Roman feel to it. But I would say it is mostly medieval in style, and early medieval if I consider the battlements. A memory of the reiving days, perhaps, when not even a church was safe from the maruaders. The Moot Hall in Hexham is built in a similar style, and the Vicar's Pele Tower in Corbridge.

Halton Tower is a stone's throw away away to the west, and it is certainly noted as a fourteenth century tower built during the Border warfare. The house on the side is seventeenth century and there are said to be remnants of an older building to the north of the tower, but the house is in private hands so I can't go in and rummage around like I can at Aydon Castle, a mile and half to the south.

This is the area where 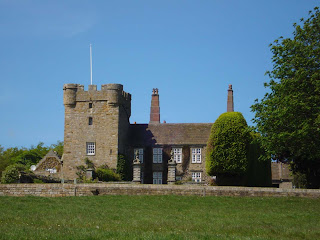 I've chosen to set my Tudor romance TILL THE DAY GO DOWN, hopefully to be published sometimes this summer. The title comes from an old snatch of verse by Hobbie Noble, full of both threat and promise. I thought it gave the flavour of the men who lived then.

But will ye stay till the day go down

Until nght comes o'er the ground,

And I'll be a guide worth any twa

That may in Liddesdale be found.

Border Reivers Halton Till the Day Go Down