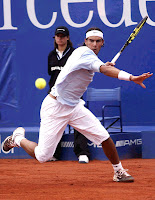 I am intrigued by this man, and even I think that's a little strange and hard to explain in a mature woman. But rest assured that though his physique is certainly attractive, it is not, as everyone probably suspects, the reason for the interest.
Not my sole interest, shall we say. I have been looking for an image that encapsulates his ferocious concentration on the ball, and the second picture (taken by Julian Finney/ Getty Images) comes closer to it.

What I really want is the moment before he hits the ball, when he reminds me of one the hunting animals with prey in sight - the same intense concentration. And it isn't just for that one ball, nor that one game, but for entire matches; the fascination is how he manages to maintain that level for two, three hours or more.

There's also his sheer commitment to return everything, no matter how difficult, and to return it with interest. His physical stamina is incredible, but his mind must be his most powerful weapon. He seems to think positive all the time, no matter what people like Federer throw at him - and Federer is a man who can deliver the most telling shots without effort.

Tennis players must think very quickly. Tennis balls travel the length of the court in normal play at something close to 90 mph and the players must have reflexes that are truly phenomenal. Hard enough to get the racquet to the ball and return it safely, never mind turning the shot into an attack as well.

Some of this I may well be able to incorporate into a hero at some point. Not that my heroes play tennis, you understand; but I can try and instil some of the relentless "attack" into a sword fight or a verbal battle. It is astonishing how much sport we can observe, absorb and use in writing fiction.

My current hero lives in Regency times, and he needs to be a bit of an action man at times. If I could conjure up a little of Nadal's intensity for him, I think it would be good. I should certainly enjoy writing it!
Federer Rafa Nadal