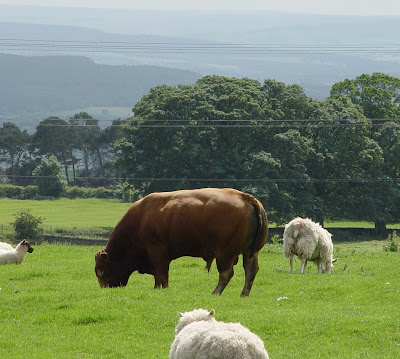 This is the view south across the Tyne valley towards the Durham hills and the Pennines.

The path is part of the Hadrian's Wall Walk and there was a very flimsy looking fence between me and that powerful male creature. I kept one eye on him on my right and one eye on the wall at my left so I could make a hasty exit *over* the wall if necessary!

However, he took one look at us and went back to grazing. I was researching the locale for the story I'm just beginning. There is a castle a little further down into the valley and that is where my heroine will live. She will be living in the sixteenth century and I'll keep thinking about her here in this century.

It's right on my doorstep. Couldn't be easier, and it is really picturesque. 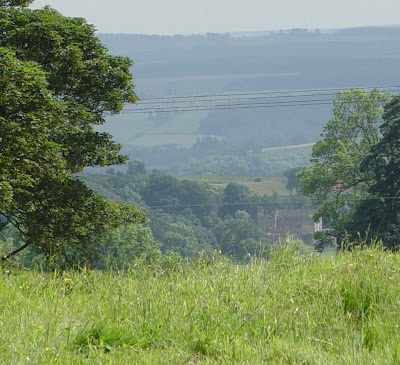 Can you see the vague grey-brown shape in this picture? Well, that's the castle, and if you can ignore the telephone wires cutting right across the picture, it is romantic country.

The nearest village is Corbridge - and the nearest town is Hexham, four miles away. In medieval days Corbridge was a big, bustling place probably because it was centred on the old Roman Corstopitum, the meeting place of five roads and for some of that time a bridge across the river and a ford if the bridge was unusable. It used to have four or five churches until the Scots burned out all but one. St Andrews is still there with its Roman arch, Saxon tower and the communal oven tucked into the wall behind it.

Once there was a royal residence for the English kings, but that went with many other buildings when Wallace brought the Scots over the Border. He trapped 200 scholars in Hexham Abbey School and burned the place down. Naturally enough, we Northumbrians don't think too highly of Wallace, no matter what Mel Gibson thinks. 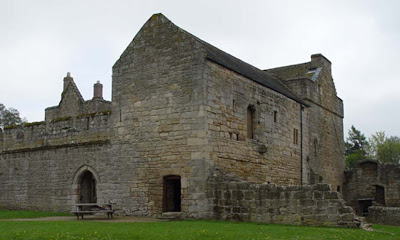 The picture is taken within the curtain wall. It is a genuine fortified thirteenth century manor house, originally built in 1290. It was converted to a farmhouse in the seventeenth century and was in occupation until 1966. It is surprisingly unaltered from its original state.

dh and I walk in this area frequently and it is lovely to sit in the sun within the shelter of the curtain wall and enjoy the luxery of an ice-cream from the tiny English Heritage shop and ticket office before heading off down the steep path through the woods to Corbridge.

Carla said…
The sixteenth century is the time of the Border Reivers, isn't it? Will they feature in your story? I've found them fascinating ever since I came across George MacDonald Fraser's The Steel Bonnets. Aydon Hall looks eminently defensible!
6 July 2007 at 12:46

Jen Black said…
They certainly will! I can't wait to get started but other things keep getting in the way!