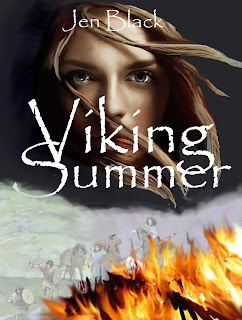 My US publisher closed down as of January 2017, which means Dark Pool is no longer available even if listed on Amazon and Goodreads. So I took the basic storyline, re-wrote it and entitled it VIKING SUMMER. Then I published (March 2018) on Amazon Kindle and I'm convinced it is a better book than the original!


Blurb:
The King of Alba holds 18-year-old Eilidh as held hostage until her brother’s fine for cattle-stealing is paid. Escaping with two young companions, she falls into the hands of marauding Vikings, Comgell is left for dead, and Sorchand consigned to the Dublin slave market. Eilidh finds far more excitement than she bargained for in the great Viking centre of Dublin.
Promised as wife to a vicious and manipulative young man, her courage rarely fails even though she has little hope of escape. Then Waterford Vikings sail into the heart of the town, burning and killing in a grudge war and everything changes. Alone and frightened in the devastation, she is easy prey for men who want nothing more than a bed companion. While Finlay, Hareth and Domnall seek her in the burned out ruins, she must use her wits to survive and slowly matures in such rough, unsettled times.

My faith in my brother’s sense of fairness wavered back and forth like a sapling in a breeze as the deadline nudged closer. On the last day of June I sat forlorn among a group of young people, and to hide my distress and avoid conversation I picked up a discarded harp. My fingers plucked the strings tunelessly as I wondered if Domnall truly intended to come for me, or to abandon me here in Inverness. Perhaps I had plagued him too often and he wanted rid of me?

“The floods will have slowed him,” Comgell said as if he understood my fears. “He'll come.”

“And if he doesn't?” The harp twanged discordantly under my fingertips.

“I suppose we could go to him,” Sorchand said idly.

I had not realised he stood behind me. I glanced at him uncertainly. Perhaps he had spoken in jest, but how difficult could it be to ride back to Bundalloch? The idea took hold in my mind. If Domnall did not come and claim me, I certainly did not wish to remain in Inverness.

“Why didn't I think of it?” My excitement grew. “Will you guide me? I might get lost on my own. I know it is a long way.”

Comgell chuckled. “Sorchand doesn't know the way, either. You'd both get lost.”

Swiftly I turned to him and gave him my best smile. “But together, the three of us could surely find our way west? All we have to do is keep the sun on our left. Oh, please! Help me get home!”

The two youths looked at me as if I were mad, and then exchanged a glance. Sorchand shrugged. “Why not?”

I begged and begged, and eventually they gave in. Permission for a day's hunting was sought and received and we packed food and water for the day and strapped rolled cloaks behind our saddles. It was summer, the days were long, and we looked forward to our adventure.

Riding beside the turbulent waters of the Beauly River next day we merrily exchanged insults and snatches of song to while away the journey. Bulging hillsides soon crowded in on us, and it was only when the sun disappeared behind thick clouds that the first flicker of doubt began to wear away my confidence.

Before we travelled much further, clouds drifted down from the mountain tops and trailed chill fingers of mist across my face. I pinned my cloak tight about my throat and glanced anxiously around the greying landscape. It was going to be a miserable journey. We plodded on in silence.

We sheltered overnight in a dry cave and kept our horses close by. We were in wild country, and wolf and deer tracks abounded in the moist earth. In the dark hours of the night something woke me as it snuffled and grunted through the bracken and heather beyond the cave mouth. I held my breath and checked the fire; it was very low, but Comgell had already stretched out a back and the sounds outside faded away into the darkness.

Next day the low sweeping arms of a pine forest reached out, gathered us in and then sprawled twisted roots across the earth to trip our ponies. Stubs of rock like old, splintered teeth clicked and rattled against their hooves. Vague, fleeting scents of the sea came to us on the wind as we rode over a high ridge. My spirits lifted, but the light-hearted camaraderie of the first hours of our journey had disappeared. Sorchand’s morose expression suggested he regretted agreeing to help me.

An abandoned shepherd's hut sheltered us that night, and I felt safer than at any time since we left Inverness simply because it had a roof and a door, though it hung so drunkenly askew we had to roll a heavy stone against it before we slept.

Next morning hand to the woodpile we had collected. He held his finger to his lips and smiled reassuringly. Sorchand slept on, undisturbed. A flame caught the new wood, and I lay, half awake, I crouched beside the ancient stone hearth and focussed on the dividing the carcase of the goose Comgell had brought down the previous evening. Cooked but cold, it offered a generous if greasy breakfast.

Sorchand paced the confines of the small dwelling. Comgell waited behind me, one shoulder propped against the rough and lichen spotted walls of the hut. Sorchand stopped pacing and his leather boots planted themselves next to the flat stone on which I worked. “We must be near Bundalloch by now?”

I shrugged, frowning at his peevish tone. Outside, a crossbill called, and one of the horses nickered to its neighbour.

“I don't know, Sorchand.” I was never good tempered on first awakening.

“You said last night you could smell the sea.”

I banged the knife down on the stone and glared at him. “If I recognise anything, I shall say so. Let me concentrate—” I broke off, eyes unfocussed, listening. Outside, the horses jostled and snorted.

Sorchand stooped, reaching for the knife as a spear shot over his shoulder and thudded into the soft earthen floor beyond him. With a screech of tortured timber the door burst open to admit a rush of two big, burly men. The owner of the spear vaulted through the window after it. Someone swung an axe at Sorchand's head.

I sucked in air, choked and scrabbled backwards away from the bearded, bright-eyed giant who stepped across the fire, clapped a large hand across my face and dragged me into his embrace. Around me there was a brief scuffle, full of thuds and gasps. Comgell reeled away from a blow, collided with the wall and slid to the ground. Sorchand stumbled and fell backwards.

I crouched by the wall, fear thick in my throat, and watched one of the men seize the carcass and divide it amongst his cronies. Big men, armed with long daggers and swords, they spoke in a language I did not understand. Sorchand lay in the dirt by the hearth stone, but he was still breathing. I could not see Comgell.