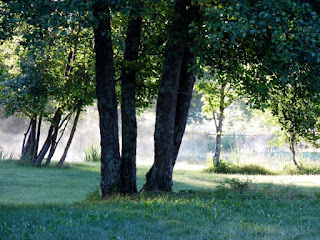 After days of 35 and 38 degrees we woke at 4.45am to thunder and lightning which rolled around for an hour gave a couple of monster cracks which sent Tim scuttling out of his basket and into my arms - and put the electricity out. That meant dh had his trek downstairs to flip the switch again. Those last two cracks were the end of it but we have half the sky dark and grey and the other bright blue. Odd. Do you remember I sent a sock up into a tree and it stuck there? Well, the wind has brought the sock down to ground again in the last half hour. So we don't know if we're going to get a thunderstorm or not - so far there has been no rain - also very odd.

The picture was an early morning shot a couple of days ago when the sun was rising and lifting the mist off the lake.
France 2015 heat storms weather