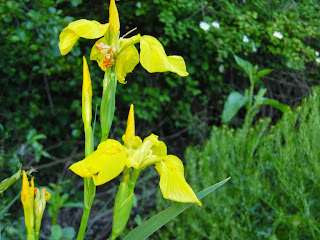 A brilliant sunny day yesterday, so not much work was done, but I did get a wash load dried, ironed and put away. There's not much work involved in putting  a washing machine on, and apart from that, we downed tools and soaked up the sunshine.
Today it is me who has the odd problem - one of my eyes has swelled. Not the eye but the socket and lid. It's either a reaction to pollen, of which there is a lot drifting about on the wind, or some tiny insect has bitten me.

I shall be relieved when the farmer has cut all his hay because only then will my nose stop prickling and filling up. In England I don't suffer from hay fever, but here, I do. The cutting is partially done. I watched the farmer cart away about a dozen plastic wrapped bales this morning while I gave Tim his early morning walk around nine o'clock. That was quite late for Tim, but then I'd been out earlier, too, for he woke me just as it was getting light with a plea to go outside. Every bird in the locality was singing in the greyness and I was glad Tim is mostly white, for he showed up in the gloom no matter how far he wandered!

The final edit of The Craigsmuir Affair is ongoing. I have cut chunks of "local character" which gets in the way of the story. I don't suppose anyone would be interested in it but me.There are no signs of it being available as pre-order yet on Amazon. There must be more I have to do before that happens.
The irises are blooming everywhere around the lake and nearby damp fields. They look beautiful.