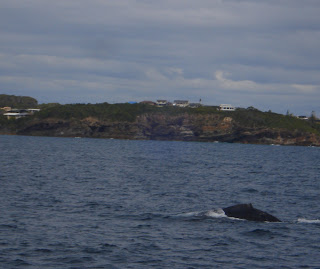 We tried to go whale watching on Friday, but it was so windy the catamaran Amaroo did not go to sea. Instead we had a wander around the shops of Forster, and came home again. Later we tried to go for a walk across the headland, but were so plagued with flies – ordinary houseflies – that we turned back.  They try and fly into your eyes, narrowly miss getting sucked into your nose and mouth, and settle in dozens on your back. I can see why the stereotypical Australians wear hats with corks bobbing around the rim, though I must admit I’ve never seen anyone with this type of headgear!


Today we tried again. Up early, into Forster for 9am, and our tickets secured. By 10am we were under way, warned that we had to sit down on the top deck because it was high tide and there wasn’t much clearance as we went under the bridge that spans the lake. Once out on the open sea, we saw whales about twenty feet from the boat – glimpses of backs and flippers, tails and some spouting, but nothing spectacular. There were several, including a mother and calf, but I was a little disappointed because not one single whale leapt out of the water, but that’s life. BBC wildlife programmes spoil everyone by bringing close up views into our homes. It seems so easy, but the cameramen probably spent six weeks at sea to catch the spectacular footage we get to see. My little camera wasn't up to the task!


The boat trip was great with or without the whales. Riding the swells by sitting astride the seat and gripping with my knees as if I was riding a horse, leaping up and nearly falling over whenever a spout or black hump showed in the water. Trying to keep my balance as I walked a crazy path across the width of the boat, staring out over the rolling swells coming in off the Pacific and wondering if the sun was going to come out or the storm clouds on the horizon would drift closer.
Australia 2012 BBC boat trip Forster whales