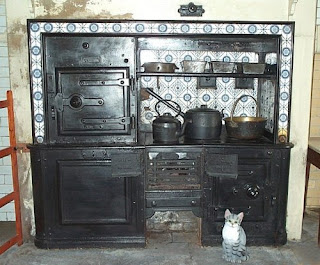 I watch Escape to the Country several times a week. If only I had 3 or £400,000 to spare, I tell myself, and settle back to pick holes in every dwelling I see. What amazes me is why today everyone wants a country/farmhouse kitchen with a range cooker.
Why, I ask myself?
Farmhouse kitchens were big because the mistress was expected to provide meals every day for the farm workers, who might number fifteen or more on a big farm, as well as her family. It wasn’t that long ago, either. My brother worked on a farm in the fifties, and came became so sick of turkey he wouldn’t touch it for years after – if he ever did. The farmer’s wife ran her own flock of turkeys for pin money, and those she failed to sell at Christmas went to feeding the farm labourers and her family. Day after day after day they received turkey….
Today machinery has overtaken the farm labourer, and families are not as big as they used to be. Two or three kids, two dogs and a husband certainly won’t fill the space left by fifteen burly farm workers. So why this hankering after farmhouse kitchens?

I think its nostalgia with a sprinkling of aspiration to a higher social class. When cottages didn’t have much in the way of kitchens, then the farmers’ wife would be Queen. Plus which Agas have cropped up in the page of Trollop/Cooper/etc novels until they’ve been accepted as upper class cookers, and therefore everybody wants one, but really, unless you have the knack of handling them, they’re unwieldy beasts. Overheating when you don’t want them too, lukewarm when you need them. Those controlled by a gas tap, are, of course, cheating.

The thing prospective buyers always bleat is ‘I can cook and still talk to my guests and we can eat in the kitchen.’ Well, they may be different to me, but I don’t want to get dressed in my best to sit in the cooking smells of my friend’s kitchens, however good their ventilation system and their cooking. None of my friends, and certainly not me, manages to cook without making a hell of a mess. Why would I want to sit in the remains of the effort that has gone into preparing a four or five course meal? Am I meant to feel guilty? Nor do I want to see the mishaps (or reveal my own, more than likely!) that happened along the way. And would you dare converse with a red-faced cook who was busily whipping up a red wine sauce that you were expected to eat in a few minutes? Not I. Something might go wrong.

For me, the security of a door to shut between me and my guests is paramount. They can chat in the relaxed ambience of the dining room, while I run from oven to hob to sink like the demented hostess I am. I mean well, and I’d love to succeed really well, but cooking …
The oven is part of Cragside's kitchen at Rothbury, Northumberland.
Escape to the Country farmhouse kitchens