Publication of Till the Day Go Down 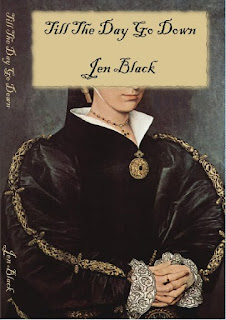 Author copies arrived this morning, so I presume it is safe to announce my new book!
I'm really pleased with the cover, which I left entirely to the publisher this time.
Here's the blurb - "Alina Carnaby lives a quiet life in the Tyne valley until Harry Scott saves her life, and reivers steal the family’s cattle. She discovers a body, her brothers blurt out a secret and her father orders Harry’s death. The name Scott is an alias. Why would Harry die rather than reveal the truth? Can she evade the marriage her father planned for her?
Standing at the altar rail, she has two men claiming her hand and neither will give way…
It's an exciting tale set in 1543, when theft, kidnapping and arson were a way of life on the borders between England and Scotland."
The title comes from a chilling little poem of the times:
But will ye stay till the day go down
Until night comes o'er the ground,
And I'll be a guide worth any twa
That may in Liddesdale be found.
The book is published by Quaestor2000, ISBN 978-1-906836-17-7 and available via Amazon, the Book Depository and all good bookshops.
Jen Black Quaestor2000 Till the Day Go Down

Anita Davison said…
Congratulations Jen, and the best of luck with your new book
26 November 2009 at 15:09

Carla said…
Interesting cover - fits right in with the headless-lady-in-period-costume look. It reminds me of some of the Mary Queen of Scots portraits - do you know where the picture comes from, out of interest?
Congratulations, and good luck!
26 November 2009 at 16:12

Unknown said…
Ditto almost what Anita said: Mega congrats and sales on your book. You must be very proud. The feeling is such a great one.

Jen Black said…
Sorry, I have no idea about the person in the picture. If I discover who she is, I'll let you know. Thanks for all the good wishes, it is really exciting!
Jen
26 November 2009 at 19:15

Carolin said…
Congratulations, Jen! If it's on par with your current story (which, I assume, continues this one), it should be a great read!
27 November 2009 at 01:52

Lise said…
A stunning cover - and perfect, according to your blurb. Enjoy the moment!