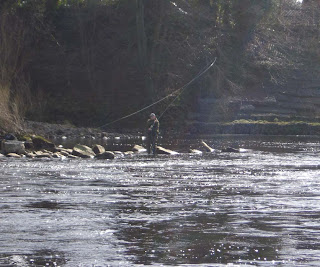 A lone fisherman on the banks of the Tyne no doubt hoping for a spring run salmon.

After six days of reading everything I could lay my hands on, I think I have a handle on what I need to do with KT. Cut for pace as they say in the trade. I have cut. I've also improved what was there by re-writing some dialogue, sharpening up the interaction between the characters, by having the hero share info on the villain much earlier. Now when the readers meet him, they will already have expectations of him. The heroine, of course, isn't privy to the information. So, I'll let that simmer for a couple of days and then go back to it.

On other topics, I'm happy to see that Nadal has won the championship at Indian Wells in California. Murray did well to get to the final and can be happy he beat Federer on the way even if he couldn't handle both Nadal and the 40 mph wind.

On the home front we are having new counter tops installed in the kitchen as I write. The sink has been out of action since Saturday morning as hubby wanted to be sure he could isolate the water supply - which means we have water everywhere else but the kitchen sink - without any hitches. He succeeded, and I can't tell you how many times I've turned to empty coffee dregs into the sink and realised just in time that it isn't plumbed to the waste outlet any more. Grrr.
edits Indian Wells KEEP TRUST pace writing

Anita Davison said…
Not to mention fish, tennis and drains!! As one of your critique partners, I'm enjoying KT very much and wish you every success with it.
23 March 2009 at 14:57