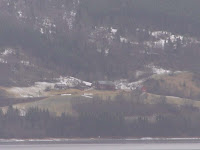 You may think this is a poor quality photo but I assure you it is exactly the view I saw from my hotel window!

Voss is not the happiest place to be in January, though I am sure it is very pretty in summer. Or in winter, should the sun happen to shine. We spent a week there, and saw only brief glimpses of the sun, and I really do mean brief - ten minutes on two days would cover it!

In fact it wasn't the best trip we've ever made. We travelled with Inghams, and probably because we did not read the small, small print - I'd need a magnifying glass, actually - we failed to realise that after a two hour wait at Newcastle we flew south to Amsterdam Schiphol, hung around there for three hours and then flew north to Bergen. Had we flown north east from Newcastle, we could have been in Bergen instead of Amsterdam. Also, on one flight we received no food, and on the other a sandwich. Since we had no Dutch currency to buy anything in Schiphol, we were ravenous by the time the sandwich appeared.

Then there was the two hour coach drive in the dark to Voss. I slept through the last third of it. 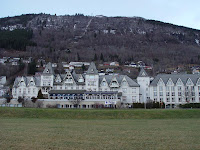 Fleischers's hotel seemed nice. One of the leading hotels of Europe, one of the Wooden Hotels of Norway. Yes, that is a white wood exterior, and much of the the interior is a rich dark wood. A pleasant but slightly odd ambiance with family photos of the Fleischers on every wall.

Our room seemed small and stark with a polished wood floor and a miniscule bathroom without a bath (always a good thing on a skiing holiday so as to soak away the aches and pains of the day) but everything was very good quality and the shower was so powerful it was almost bounding off the wall. We had two hours to wait until dinner, but at least we were to be fed. Veal. I don't eat veal. I gave it all to Bill. The soup and vegetables were nice, but haute cuisine it was not. I can't remember dessert, except that I ate it.