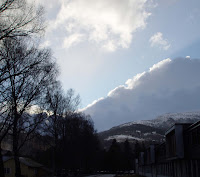 That isn't a mountain, it's a cloud formation sweeping in from the west towards Voss.
Just one last recollection of my Norwegian holiday - at Schiphol airport in Amsterdam we walked to the gate for the Bergen flight and sat down. We were early. Other passengers gathered, slowly. I began to get a sense that I was surrounded by rather large, tall chaps. I asked dh, and he concurred. Vikings, he said, grinning.
Don't be silly, I told myself. Just because you write about them doesn't mean you have to collect them. But I kept up with the sneaky glances. There are tall men in the UK, certainly, and some of them, especially if they have outdoor, active lives, are good and broad across the shoulders. Go to a pub like the Pheasant at Stannersburn and many a husky Northumbrian lad will tower over you at the bar.
But the collection at Schiphol loomed around me. Not only broad shoulders, but heavy thighs, thick wrists - and so many in one place! I began to fear the plane might not balance up correctly.
There was only one problem - not one of these guys was blond. Every shade of brown, but not a hint of fair hair. Not Vikings, then.
In Bergen, the big men vanished. I don't know where they went, but they didn't go skiing, and they didn't go to Voss. Except for our driver. He was definitely one of them, and his name was Einar. His knees almost touched the dashboard, he was so cramped into the seat. First thing we saw at our hotel next morning? Three or four female staff all with silvery-fair hair. The typical iconic Norwegian colouring, and they were all big girls, too.
I kept looking all week, but I never saw a man - young, old, tall or small, with that same silvery-fair hair.
hair Vikings Voss