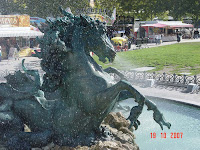 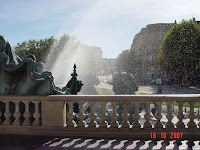 was a surprise. We expected a seedy, industrial port like Marseille, but instead found a gracious city on the banks of the Garonne with Roman remains, medieval churches and broad streets lined with tall 18th century buildings.

We hadn’t looked it up in any guide books, so we knew little about it. We got some idea of its size on the motorway approach and began to quake about driving into the capital of Aquitaine. Then we remembered that the French are very good at directions for Centre Ville and providing huge underground car parks for when you get there, and relaxed a little.

The river is huge. It makes the Tyne look like a brook, and at the end of the bridge, the road led up the hill through towering old buildings. Um, we said, looking around. This is nice. We went with the traffic flow through a huge archway that made me think of Aosta’s Roman remains, avoided the road works, missed the first car park sign and caught the second but missed the entrance.

Round the square we went once more, spotted the entrance and dived into it. No time for mistakes here, or the traffic will be upon you, horns blaring. Down we went, found a spot and then we had the afternoon to enjoy Bordeaux. Bill got very brave and asked directions of a passing Bordelais. “Centre Ville?” The man looked puzzled, as well he might. I pretended I was finding something in my purse. Haltingly came an explanation. I could tell by Bill’s slight widening of the eyes that he’d followed the first couple of sentences, but as the French speeded up with the man’s enthusiasm, all was lost. He thanked him profusely in French, and backed away.

We headed, as directed, into the Place Pey-Berland, and gazed open-mouthed at the Cathédrale Saint-André de Bordeaux. We’re not unused to cathedrals in the UK, but this one was huge and sat plonk in the middle of a large square surrounded by restaurants. We marched into Le Café Francais and opted for service en terrasse, face a la cathedrale. We ate the day’s special offering: pieces of different varieties of fish with garlic lemon-butter sauce, chestnut flavoured potatoes and a vegetable. I scoffed the lot, and had to be restrained from licking the plate. 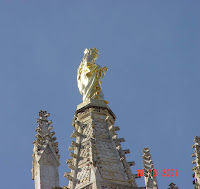 Inside the cathedral I was struck by the huge musty darkness of one end and the light,

brightness of the other. It was like two churches joined together in the middle. They say the foundations reveal (or hide, depending on your point of view) Roman walls. Pope Urban II consecrated the building in 1096 and it is now a monuent of France. The Royal Gate is from the early 13th century, while the rest of the construction is mostly from the 14th-15th centuries. 15 year old Eleanor of Aquitaine married Louis VII here in 1137, a few months before he became king.

I know a bit about Eleanor. In my mind, she always looks like Katherine Hepburn. (Amazing what a film like The Lion in Winter can do.) After Louis repudiated her, Eleanor of Aquitaine married the French-speaking Count Henri Plantagenet in 1152. He was born in Le Mans. Within months of their wedding, Henry became King of England. Lucky Eleanor. Two out of two. The French called her Alienor, and her dowry, when she married Louis, consisted of the Guyenne, Gascogne, Poitou, Limousin, and Perigord regions. That’s a hell of a dowry. It must be almost a third of France.

For three centuries afterwards, Bordeaux was ruled by England, and the city flourished, primarily due to wine trade. I was so impressed I bought a guide book, intending to read and find out more with another visit, possibly a long weekend, in mind. I was amused to find these opening lines: “Bordeaux began with water which seeped into its name and continues to saturate it. And the truth is, it’s still flowing…” Pierre Veilletet, Bords d’eaux.

The Place des Quinconces is said to be Europe's largest municipal square. It may well be so, but now ultra-modern trams use it as a terminus, and a permanent sort of fairground occupies a good deal of it. The smell of popcorn and candy floss made my stomach heave but what had caught my eye was the Monument aux Girondins. I could hardly miss it. I had seen it from way down the Crs de 30 Juillet - a huge white fountain adorned with a 43 meter high column topped with a statue of "Liberty breaking its chains".

I wandered around in amazement. It was built, according to the guidebook, “in honour of the influential local deputies to the 1789 Revolutionary Assembly, later purged by Robespierre as moderates and counter-revolutionaries. During World War II, in a fit of anti-French spite, the occupying Germans made plans to melt the monument down, only to be foiled by the local Resistance, who got there first and, under cover of darkness, dismantled it piece by piece and hid it in a barn in the Medoc for the duration of the war.” 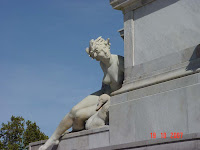 This cheeky maiden peering around the corner was just one statue at one corner and there were four corners. Each statue was totally different, and there were another four corners on the second story, so to speak.
What made it weird was the fact that the funfair was jammed in right behind it, so close that it was impossible to get a clear shot of the whole thing. Huge red and white pylons shoot up from the middle of the chariot... 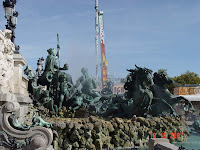 Out at the front, another lady plus outriders, drives her four horse chariot down to the river. If she ever breaks loose the pedestrians on the Crs de 30 Juillet had better scatter for she doesn't look like much would stop her and I did worry for the horses. They had finned feet rather than hooves.
Perhaps you can see why I was entranced.
Bordeaux