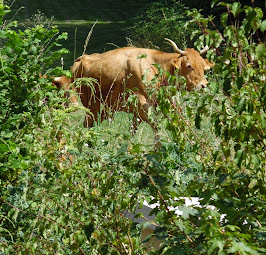 Hoping to spend some time in France this year, I was meandering through some of my blog posts. This one is from July 2015:

In the heat of the afternoon it has become my habit to take a nap. Sometimes I fall asleep over the computer because I'm up at six to walk Tim while it is cool, but sometimes I take myself to the bedroom and lie down. It is cool there on the west side of the house, and as this terrible heat continues, that is welcome. It wasn't long before Dh crashed through the door, Tim barking hysterically in the distance, and the news that, like Houston, we had a problem. "The cows are in the garden and Tim's setting them off." Exit husband, pursued by moi.

Sure enough, there are two very large chestnut beef cattle wandering only yards from the bolly fence and Tim is beside me at the window bouncing on his hind legs and barking insults at them. (He had followed Dh inside, which is a good thing.) We hastily shut the door to keep him there. 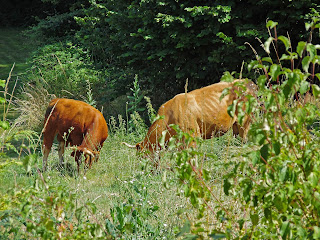 H’mm. Unused as we are to dealing with cattle, especially very large ones with horns and not much to choose between bulls and cows in muscular power, we discussed what to do. I feared they could wander around the corner and up onto the bolly and into the house. Or fall into the swimming pool and damage both it and themselves. They were within ten feet of the bolly when I remembered the "bull" was one of the calves born this year and still following his mum. The old bull lives with his harem, but I've only seen him at a respectacle distance of 100 yards across the field. The son was impressive enough and he was interested in the long grass growing by the head of the pound and snatched at it, occasionally casting an evil look in our direction. I persuaded Dh that it would not be a good idea for him to go and round them up and "chase them back into their field."

We were virtually trapped inside. I suppose we could have gone downstairs, through the garage and legged it in the opposite direction, but where would we have gone? We did not dare let Tim out, for the mother might have decided to protect her young bullock, or ….anyway, we stayed inside and phoned Tom, who lives not far away. Thankfully he knew the farmer to whom the cows belong and volunteered to phone him. He lives even closer than Tom.

Dh suspected said farmer would arrive with a tractor and trailer to take them away. I imagined two men and cattle dogs. Dh whizzed down the drive on the little bike and unhooked the chain across the drive for him. He hadn’t got back to the house when  a small Renault van showed up at the far side of the west field, slowed and bounced across the rough grass to park in the shade of a walnut tree. Out got one man dressed in tee shirt and short shorts, very tanned, very dark, a veritable Rafael Nadal lookalike but ten years older. Bonjours all round and big smiles – ours of relief to see him, naturally. I had stayed on the upstairs balcony with Tim and Dh went over to greet the farmer, who raised his cap to me as gentlemen used to do in England and old gentlemen still do. "Bonjour, madame," he said with a big smile. 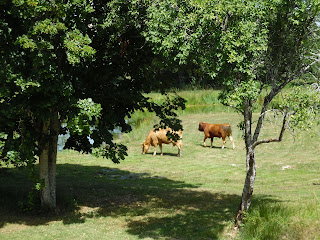 DH offered him a stick, and the farmer laughed and said Non. Off he went, all alone towards the end of the lake where the dreadful duo had now wandered. We hung out of the window, hoping he wasn't going to get hurt, watching his careful approach, retreat, approach and the not exactly friendly response of the cattle. Within ten or twenty minutes he chivvied first the bullock and then the cow down into the stream. From there he shepherded them 100 yards back up the river and into their own field at the east end of the the mill. There was much laughter and relief when he came back to his van and promised to repair the fence.

He was as good as his word, too. Twenty minutes later we heard the tap tap tap of a hammer and saw him making good the gap where the cattle had simply wandered down the stream and onto mill land – from where there was open access to the asparagus field and the road and crepes at Clermont-de-Beauregard for all we knew. 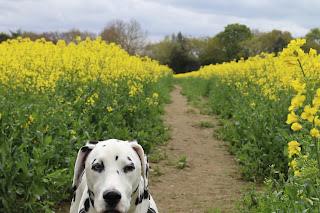 I've been thinking about the pricing of my books.

I've never known what to charge, and there are many views out there from which to choose. Traditional publishers still opt for high prices and for  a hard or paperback, there are costs. I appreciate that. But I do object to high prices for Kindle formats from them. I'm holding out on a title I want to read but it is on sale on Kindle at £4.99. I'll wait a little and see if it drops in price.

But last week I noticed that my books are all over the place as far as price goes, so I've decided to bring them all into line with each other if nothing else! It will take a little time to work through them and alter the marketplace prices so that the price is the same be it for sale in the UK or Australia.

I checked the £1.99 cover price against euros, dollars, reals and rupees and though the numbers vary, it is the same charge - or it will be when I through with the task.

The £1.99 price is tempting, but $2.80 doesn't look quite so tempting. There is a school of thought that says I should make it $1.99 but that means the book sells for less in the US than it does in the UK, and that seems hardly fair. I appreciate that exchange rates fluctuate but I don't think traditional publishers change the price every few days, so I won't either!

It will still be possible to have a week where the price is discounted or goes free for a few days.

Sunday 8 th May Slow start to a sunny day with a promise of high temperatures. Bill took Perla out at 7.30 as he has done all this month ...